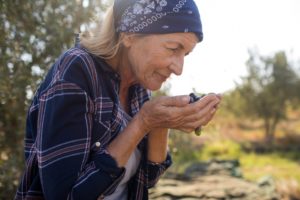 When we think about our digestive process, we think of chewing food, swallowing, food entering the stomach to be broken down, the broken-down food being absorbed by the intestines, then finally the waste being released through the colon. One process you wouldn’t think about that would impact your digestion is smell.

Yes, we all enjoy the delightful smell of some of our favorite meals, but we never think how smell affects the digestive process.

German researchers suggest that as we age and our sense of smell diminishes, it can hinder our digestive system. The study wasn’t carried out on humans though, it was carried out on worms.

The researchers found that sense of smell had a strong impact on the functionality of the gut. This is because the digestive process begins the moment we smell food – not when we taste it.

The worms reacted differently to different smells of bacteria – that is what they eat. In humans, this is also seen, as our bodies begin to act differently when we smell different foods.

The researchers suggest that a weak sense of smell sends the wrong signals to the brain, which may not prepare the digestive system properly. This can increase waste in the body. This was seen in the worms that couldn’t smell properly – there was greater waste.

Although additional research on humans would be required to confirm the findings, it can be suggested that digestion is somewhat impacted as a result of changes to one’s ability to smell. This may also shed light as to why older adults tend to suffer from more digestive problems than younger adults.