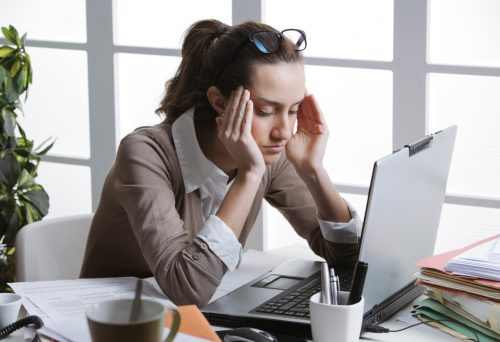 Published in The Lancet, researchers from the University College London uncovered that working more than 55 hours a week increases risk of stroke by 33 percent and coronary heart disease by 13 percent in comparison to working 35 to 40 hours a week.

This is the largest study of its kind involving over 600,000 people.

Numerous smaller studies have linked working long hours to ailments and conditions like depression, sleep deprivation, sitting too long (which has been noted for its own health risks), stress, eye strain and an increased risk of dementia.

Researchers analyzed data from 25 studies involving 603,838 men and women from Europe, America and Australia. The individuals were followed for an average of 8.5 years. Once they factored for age, gender and socioeconomic status, they found a 13 percent increase in developing coronary heart disease for those who worked over 55 hours a week.

Data analyzed from 17 studies encompassing 528,908 men and women who were followed on average for 7.2 years, had an increased risk of stroke – 1.3 times higher – if they worked over 55 hours. Factors like smoking, cholesterol, blood pressure and alcohol consumption were taken into account and the link was still strong.

Furthermore, the more hours a person worked the more their risk increased.

Although a relationship is evident, researchers believe that with an increase of work hours comes an increase in risky behaviors which jeopardize health, like less physical activity, more smoking or eating poorly.

Professor at the university, Mika Kivimäki, said, “The pooling of all available studies on this topic allowed us to investigate the association between working hours and cardiovascular disease risk with greater precision than has previously been possible. Health professionals should be aware that working long hours is associated with a significantly increased risk of stroke and perhaps also coronary heart disease.”

If you can’t control the amount of hours you work, ensure you are still partaking in healthy behaviors like eating well, reducing stress, getting adequate physical activity and receiving good quality sleep.