Home » General Health » Kombucha tea: Is it really the elixir of life? 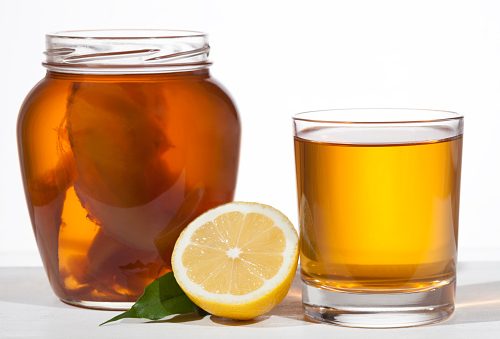 Kombucha tea has been referred to as the “elixir of life” because of its many purported health benefits, but is there really such thing as a miracle beverage? Also called mushroom tea, Kombucha tea has been claimed to offer health benefits that help with sleep, digestion, weight loss, and the detoxification of the body. It also reportedly strengthens your immune system, prevents cancer, improves liver function, and even stops hair loss, but is it too good to be true?

Despite being called mushroom tea by some, kombucha has nothing to do with the fungi. It actually gets this nickname from the bacteria and yeast that grow on the surface of the beverage and create a mushroom-like layer that floats on top. Kombucha is a fermented tea, created by adding bacteria and yeast to ordinary black or green tea and allowing it to ferment. It is said to taste earthy and tart, though many add juice to the brew in order to make it more enjoyable. Kombucha contains sugar, vinegar, B vitamins, antioxidants, and a slight amount of alcohol (due to the fermentation process).

While many enjoy the beverage unpasteurized, some doctors recommend that you opt for a pasteurized version as the raw, home-brewed kind has a higher risk of containing unhealthy bacteria due to brewing in a nonsterile environment. Potential side effects of drinking unpasteurized kombucha tea include upset stomach and, in more severe cases, metabolic acidosis – which is the excessive buildup of acid in the body.

While there are many claims of kombucha tea having a wide array of health benefits, these claims are mostly based on personal reports and a select number of animal trials. No human clinical trials have been conducted as of yet, and there is no concrete scientific evidence to back these claims. The absence of scientific evidence does not mean that these benefits do not exist, rather that there have been no studies or trials conducted with the purpose of substantiating these claims.


Many choose kombucha tea as it is full of healthy bacteria and probiotics that aid in digestion, however, these benefits are only linked to the unpasteurized version. Nutritionist Janet Helm likened the benefits of kombucha tea to other probiotic sources, stating, “Kombucha is not a cure-all or magical elixir, but it does have some beneficial bugs similar to yogurt, kefir, or other probiotic drinks.”

While the claims may be greater than the scientific evidence in the case of kombucha tea’s health benefits, this may be due to a lack of research. Many swear by the tea and report a multitude of benefits including a better immune system, weight loss, better liver function, and even cancer prevention, but as of yet, the only scientifically backed benefit of drinking kombucha tea is aiding your digestive system due to its probiotic content.

Iced tea: Is it good for your health?