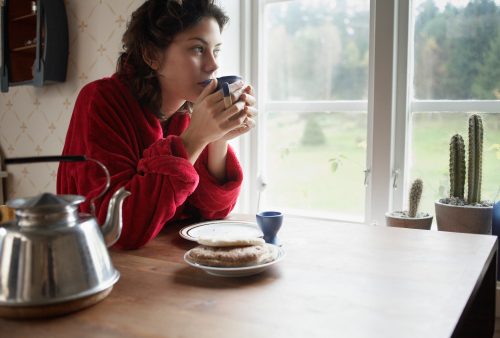 A new study finds that a daily cup of tea can help improve heart health. The findings revealed that daily tea drinkers were 35 percent less likely to have a heart attack or suffer a major cardiovascular event compared to nondrinkers.

Tea drinkers were also found to have less calcium buildup in the coronary arteries which if calcium does buildup has been linked to heart disease and stroke.

Instructor at Johns Hopkins Hospital, Dr. Elliott Miller, said, “We found that moderate tea drinkers had a decreased progression of coronary artery calcium and a decreased incidence of cardiovascular events.” Dr. Miller did point out that a cause and effect was not found but merely an association. “This is an observational study and we can’t say for sure it was the tea or just the healthier lifestyle of the tea drinkers,” added Dr. Miller.
Dr. Miller and colleagues looked at data of over 6,000 men and women part of an ongoing study since 2000. At baseline, none of the participants had heart disease.

The researchers tracked individuals who experienced a heart attack, stroke, chest pain, or who had died from any heart-related occurrence over the course of 11 years. Calcium deposits were also measured over the course of five years and CT scans were compared from prior and later years.

The findings revealed that daily tea drinkers had one-third less risk of any major heart event compared to those who did not drink tea regularly. Regular tea drinkers also had less accumulation of calcium deposits compared to nondrinkers.

The researchers cannot say for sure if consuming more than four cups of tea would offer additional heart benefits as very few participants consumed that much. Also the variety of tea people consumed varied meaning it was not specific to one type over another. Lastly, although the researchers don’t know for sure as to why or how tea benefits the heart they speculate it has to do with teas flavonoids which can have protective properties.

Dr. Miller added, “It’s too early to say drinking tea will help you have less cardiovascular events, like heart attack and stroke. But it does suggest there could be a protective nature of tea, or that tea drinkers in general are healthier individuals.”