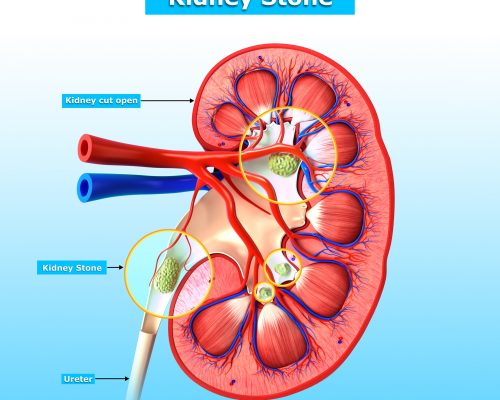 The scientists tracked over three million patients for an average of 11 years. They used hospital records to identify episodes of kidney stones and subsequent development of chronic kidney disease, kidney failure. or raised creatinine levels.

There were 23,703 patients who endured recurring kidney stones during the follow-up period, where four percent went on to develop late-stage chronic kidney disease, 0.3 percent experienced sustained doubling of creatinine levels, and 0.2 percent developed kidney failure – compared to those without a history of kidney stones.

The risk of developing later-life kidney problems as a result of kidney stones was greater in women than in men, and among younger individuals, compared to those over the age of 50.

The researchers suspect that the calcification process involved in the formation of kidney stones may be the link between kidney stones and later-life kidney problems.

The researchers concluded that it is “…a graded association between episodes of kidney stones and the risk of adverse renal outcomes…” Further research “…should be aimed at determining the mechanisms explaining this association and assessing the optimal way to prevent kidney stones in the general population, especially young women.”


Kidney stones can cause kidney damage and kidney failure

Researcher Todd Alexander said, “I think what these results tell me is that we should be screening those with a history of kidney stones for risk factors for the development of kidney disease. I am not surprised by these findings, because when you are passing a stone through a kidney, there is definitely the potential for permanent damage.”

The researchers suggest that half of those who develop kidney stones will go on to develop reoccurring kidney stones. Marcello Tonelli, co-researcher, added, “It’s important to note that the vast majority of people with kidney stones won’t develop permanent kidney damage. But a few will, and that’s why it’s important for people with stones to get proper follow-up care — to reduce their risk of another stone, and to detect kidney damage if it has occurred.”

To decrease the risk of kidney stones people should lower their sodium intake, stay well hydrated, and take certain medications if required.