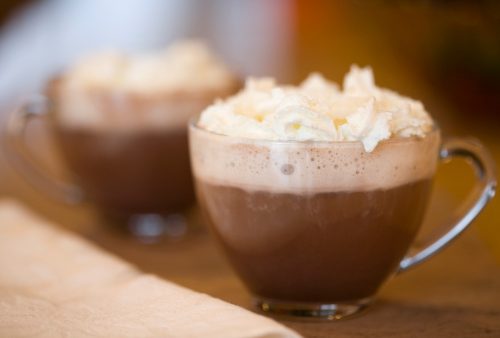 For many of us, the thought of hot chocolate brings to mind happy childhood memories of being treated with it’s frothy sweetness on cold days, or sipping on it for it’s sleepy warmth before bedtime. However, a Harvard Medical School research team recently proved a case for us older folk to continue indulging in hot chocolate as well. It would seem that this soothing and delicious beverage is not only a sweet treat, but may also hold the key to increased blood flow to the brain, refined cognitive function and improved memory.

The first chocolate-like drink was developed by the Mayans about two thousand years ago.  The drink became popular in Europe before being modified and making its way into North America. Today we can get it various ways; made with milk, steaming hot water, or in white or dark chocolate form.

A team at Harvard took sixty people in their seventies who were in relatively good mental health and did not suffer from dementia. The study participants were instructed to drink two cups of hot cocoa every day for thirty days. During this time, participants were not to consume any other chocolate. At the end of the month, each person was given a memory test and an ultrasound to measure the amount of blood flow to their brains. Of the sixty, eighteen who had impaired blood flow to their brain at the beginning of the study showed an 8.3 percent improvement in flow by the end of the study. Those who started out with regular blood flow to the brain showed no improvement or changes.

Interestingly, the participants with improved blood flow in the brain had also shown improvement on the memory tests. This prompted the researchers to conduct MRI scans on certain study participants to detect any brain damage. The scans found that people with impaired blood flow had indeed exhibited damage in some areas of their brains prior to the hot chocolate study. The authors of the study say they are learning more about blood flow in the brain and its connection to cognitive thinking. They believe it may play an important role in different levels of dementia, including Alzheimer’s.

The study, published in the American Academy of Neurology is an important step that could guide further studies in the area of blood flow and the brain.

Such research proposing health and brain benefits of cocoa are hardly coming out of left field.  Researchers at the University of L’Aquila in Italy made the connection in 2012 after an experiment with 90 elderly people. Their findings suggest that flavanols, a compound found in cocoa, helped improve brain function when ingested at high levels. In this study, three separate tests were conducted to measure verbal communications, visual ability, and attention span of the participants.

Chocolate also contains a chemical called tryptophan, which impacts the brain. Studies show it produces high levels of serotonin to stimulate feelings of elation. Chocolate is also known to help prevent premature aging, as its antioxidants help to fight free radicals. While all of this is encouraging, keep in mind that chocolate and chocolate drinks tend to contain a high amount of sugar, which can have many negative effects on your health if regularly overindulged in.  Talk to your doctor first to see if including chocolate in your diet on a regular basis is the best approach to boost your brain health.