Home » Weight Management » Diets » Is There Plastic In Your Fast-Food Sandwich? 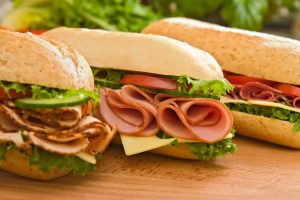 What do you usually put on your sandwich at the fast-food counter?

RELATED READING: What The FDA Won’t Tell You About Food Chemicals

Subway has come under scrutiny lately because its bread contained an ingredient also found in the production of yoga mats. This toxic additive, azodiacarbonamide (ADA), is actually legalized in North America for consumption in small amounts. Its main purpose in food is to create that fluffiness you’ve grown to love in bread, the same fluffiness that makes yoga mats soft to use.

So why all the fuss now, if it’s been passed as OK? Well, the public has spoken up: In fact, more than 50,000 people have signed a petition at http://foodbabe.com/subway/. We no longer want to ingest toxins for breakfast, lunch or dinner!

It may seem strange that a toxin used for the formation of plastic is safe to ingest. Well, it is: Media reports have circulated results of ADA experiments on mammals where studies have shown a high level of toxicity, mutated bacterial systems, asthma and skin irritations, not to mention killing dogs dead. To top it all off, Europe and Australia have banned the use of ADA in foods.

And the World Health Organization (WHO) has issued a report stating, “Case reports and epidemiological studies in humans have produced abundant evidence that azodicarbonamide can induce asthma, other respiratory symptoms, and skin sensitization in exposed workers.”

Subway recently made a statement about the removal of ADA within its bread, largely due to the online petition. And although Subway has been thrown into the spotlight about its use of ADA in bread, many other notable companies are still using the toxin. CNBC reports fast-food joints also allegedly serving up ADA include McDonald’s in its buns, Burger King’s artisan buns, Arby’s croissants, French sticks and assorted buns, Wendy’s buns, Jack in the Box’s buns and croissants, and Chick-Fil-A’s chicken sandwiches.

A McDonald’s spokesperson told CNBC that McDonald’s reveals all ingredients of its menu items to customers, so if customers choose to eat the food, it’s their decision.

Since ADA is approved by the Food and Drug Administration (FDA), McDonald’s is in full compliance. A representative from Dunkin Donuts made similar claims recognizing that the FDA has allowed traces of ADA to be used, yet the donut chain is considering removing the ingredient from its baked goods.

So where is it safe to eat? If so many fast-food places are OK with adding toxins to your meal, is the only solution to eat at home?

Making your own meals is the better choice for quality and calorie control, but life gets in the way and sometimes the need for a quick, convenient meal trumps all.

RELATED READING: Why The Coffee you Just Bought May Contain Toxins

You’ll be happy to know that other fast-food and coffee chains are following Subway’s lead. According to CNBC, Starbucks has also made a statement that the company is working toward dough without ADA.

Of course, the choice is yours when it comes to what you ingest. But before you bite into that Big Mac (plastic and all), do the research and make sure you’re comfortable with all the facts.

Let’s keep the plastic under your Downward Dog.