Home » General Health » Is the internet stealing away my son’s childhood? 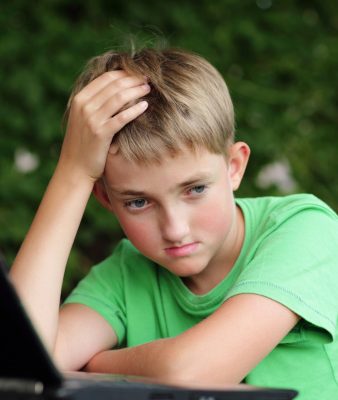 Many of us grew up hearing guilt-driven lectures from parents and grandparents telling us how much harder things were for them growing up.

“As a boy growing up, if I needed to get anywhere, I’d have to walk there,” my father would sternly say to my sister and me as young children. “If I wanted something to eat, I couldn’t just buy a bag food at the store like you do; I had to make it myself from scratch. After I finished my studies, I had to play outside; that was my entertainment…” On and on he’d go, trying to shock us with his tales of childhood hardship as we munched on our grilled cheese sandwiches and continued to sneak peaks at the cartoons flashing on the nearby television. And as these speeches would finally wind down to their blessed conclusions, he’d always end with the same, solemn declaration: “In those days, we were healthier, harder working people. Today, you kids are different…”

As a kid, I use to laugh at my father’s nostalgic perspectives. But now, as a father of two boys myself, I often catch my father’s words creeping into my own thoughts. I watch my two year old operate my smart phone better than I can, before he can even read or write. I watch my five year old sit absorbed for hours in his favorite “Dragon City” computer game, but have trouble sitting still through even an hour of homework. I read studies about how childhood attention spans and levels of perseverance are at an all time low while childhood hyperactivity disorders are at an all time high. Some researchers even propose that this generation of children actually learn differently than we did. They actually process information through different pathways than we do, and are able to sift through large masses of information better than adults can. Children’s methods of socialization are changing; surveys are finding that children are less physically interactive with each other and spend increased amounts of time socializing online. They do this alone and communicate with each other by means of short, abbreviated typed messages rather than through active, verbal conversations and physical cues.

The landscape of children’s health also seems to have rampantly altered, as health issues such as obesity, type II diabetes, depression, and anxiety disorders-all once unheard of in the childhood population-is now reaching epidemic proportions amongst children. Kids today aren’t even being nourished the same way. They consume a greater proportion of engineered foods, artificial sweeteners, food additives and synthetic chemicals than generations past, and are exposed to far more medications, synthetic hormones and environmental toxins.

As I continue my journey through parenthood, and as I continue to be exposed to so many fascinating medical studies from the doctors and researchers here at Bel Marra Health, I begin to wonder whether my father may have been on to something after all. Could today’s children really be different than the children from previous generations? And are they doomed to a fate of poor physical health, altered mental development, depleted emotional coping strategies and stunted social skills?

The Difference One Weekend Can Make

Surprisingly, a recent camping trip with my older son and his two friends left me with a new and insightful perspective. Three fathers and their three eldest sons decided to traverse the wilderness and spend the weekend camping out with nothing but their tents, a cooler, a pot, and a few staple food items to carry them through their “Big Boys’ Adventure.”

The car ride up to the campground started out in its usual manner. “Daddy, are we there yet? Dad, I’m bored…are we there now? Can I play with your iPhone?” When we finally arrived and met up with the other two father-son teams, the dads began to unpack their tents and provisions as the boys each nabbed their fathers’ phones and escaped to a nearby rock, each immersed in his favorite app.

The first breakthrough came in chorus with the first groan: “Augh, there’s no internet connection here!” Soon enough, all three boys hesitantly abandoned their efforts with the smartphones and finally dropped them in frustration. With “nothing else to do,” they saddled over to us to give us a hand with setting up. We helped each other pitch tents, unfurl sleeping bags, collect wood, build up a decent fire and throw together a quick one-pot dinner before we started to settle in for our first night on our campsite.

The second breakthrough came shortly thereafter, as the gradually graying sky finally cracked in half and a severe thunderstorm suddenly chased us from our fire. We quickly piled into the biggest tent, zipped up all doors and windows, and sat staring at blank canvas walls, listening to the deluge outside.

No television. No internet. No electronic gadgets of any kind. So far our modern-day children were not impressed, not used to being faced with no blinking or beeping forms of stimulation. The “I’m booooored!” moaning began again…until I suddenly decided to break up the protests with a riddle. “If two T-Rex dinosaurs got into a fight with five Velociraptors, who do you think would win, and why?” Stunned into silence, the boys blinked at me uncertainly at first. Then they slowly started to talk out the solution together. Pretty soon, all three fathers were coming up with rotating riddles, word games and math problems, as the boys excitedly called out their answers and hungrily begged for more. The stimulating conversation rolled on late into the night, until each boy was carried back sleeping to his tent.

The next day, we headed out to the beach. Discovering some sticks and discarded bottles in the sand, the boys immediately started digging holes and filling them up with lake water. The two other dads and I sat down to discuss other events and plans we could come up with for the morning, but we soon discovered there was no need. Without a single toy or video game in sight, our boys happily entertained themselves with their sand holes and make-shift water cans for five hours straight. We couldn’t believe our eyes.

We then headed back to our camp site, kindled a fire, and started roasting strips of chicken and corn, served with sides of raw vegetables and fruit. The children wolfed down their meals with hungry delight. No bribery was required to get the vegetables eaten, and no requests were made for dessert or junk food. The evening continued with enthralled stick poking into the blazing fire, and eager requests for more riddles and story-telling before bedtime.

The next day was yet another successful repeat of the first, except this time it was happily spent with nothing but a simple open field of grass, one ball, and an active series of soccer games, red rover, dodge-ball and tag. More vegetable eating. More engaging conversations. No misbehavior, hyperactivity, requests for iPhone games or complaints of boredom.

On the last night of the trip, the fathers and I commended each other on a surprisingly successful trip, but exchanged silently curious glances. What had happened to our constantly distracted, easily bored, junk-craving, technology-addicted children we “couldn’t relate to”? Who were these happy, relaxed, mentally-stimulating boys who had taken their place? Suddenly, they became just like every other child in every generation; they loved playing outside, collecting rocks, building forts, and just being kids.

On the ride back home, the answer quickly found us when we entered a roadside McDonald’s, which hosted a large flat screen television in the dining area. Sitting down with our trays, I started shooting off the next round of riddles and word problems I had enthusiastically come up with while standing in line. But this time there was no response. They ignored me completely and stared blankly at the screen, chewing like robots. All conversation ceased. Just like that, the experience came to an abrupt end, and almost began to seem like a dream that never happened.

While the scientific studies and changing medical trends of “Generation-Different” continue to pour into my office, this past weekend’s experience has made me read them through different eyes. As the American Medical Association declares childhood obesity to be an official “disease”; type II diabetes, childhood ADHD and mental disorders are regarded as the new epidemics; and multimedia over-use and behavioural problems abound in schools, I’ve now begun to fight against the subconscious mistake that so many parents make: that our children are just “different”. This conclusion is tempting, as it allows us to distance ourselves from taking responsibility for these problems. Declaring that this generation is “different” makes it easier to shut our minds against another consideration that’s much harder to face: that perhaps our children have simply become victims of an environment that we, as parents, have abandoned them in.

While it would be unfair to overly simplify these horrifying health trends amongst our children, it is also imperative that we stop allowing them to overwhelm us, and that we start taking some control back. This past weekend, I realized that control can start by turning off all electronics during designated “off” hours, and sticking to them. It can start by clearing the pantry of processed snack foods and having board game family nights, or making sure that time with friends includes an active sport, a bike ride, or other physical activity. It can involve anything that strips away our children’s “differences” from our own childhood, and uncovers what’s actually beneath: regular kids, not so different from ourselves, and not more prone to illness and disease but, rather, with the same tremendous potential for good health.

Our children aren’t so different than we were after all. This weekend I decided that I’m going to make some changes to give my children every opportunity they deserve. When we pull everything back, we’ll see that our kids aren’t aliens from a foreign planet. They’re just kids that need guidance that will help them make healthy choices throughout their lives. By being good parents, we will hopefully empower our children to conquer some of the concerning problems their generation currently faces.

Yours in Good Health,