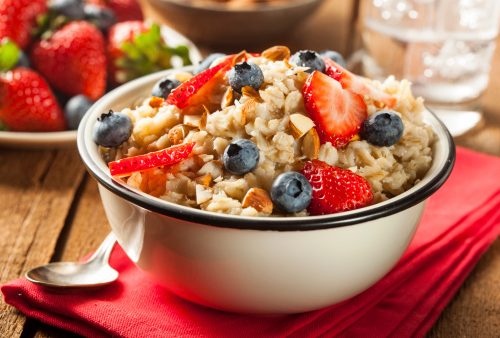 Breakfast continues to be hailed as the most important meal of the day, but with many Americans being so busy they tend to rush out the door, either skipping breakfast or opting for a coffee and muffin combo. The problem with skipping breakfast is that your metabolism slows down and begins to store fat, unsure of when it will get its next meal. This can lead to weight gain over time. On the other hand, the coffee and muffin combo offers minimal nutritional benefits, leading to sugar crashes which can have you snacking on additional junk food soon after.

Breakfast is even more important for diabetics; as research has shown, consuming a healthy breakfast can help manage insulin throughout the day. With the rise of obesity rates in America, attempting to combat overeating is necessary; therefore, the new findings prove to be beneficial as a means to lose weight.

Lead author Candida Rebello said, “When we took it a step further and evaluated the intake four hours post-breakfast, we found that after consuming instant oatmeal, the participants chose to eat significantly less at lunch compared to those who ate the oat-based, cold cereal.”

After fiber comparison between both the instant oatmeal and oat-based cold cereal, researchers believed the higher molecular viscosity of the beta-glucan was responsible for making the instant oatmeal more fulfilling. The cold cereal goes through a process that changes the fiber, thus making it less satisfying.

After participants were served either the instant oatmeal or cold cereal for breakfast, they were then served a choice of turkey, ham, roast beef or vegetable patty sandwiches at lunch, along with a calorie-free or calorie-containing beverage and a side of potato crisps and cookies. Calorie totals of the lunches ranged between 2,600 to 2,800, and participants were allowed to eat until “satisfaction” was achieved.

Therefore, instant oatmeal is not only a good choice to reduce calories consumed throughout the day, but it can also be a viable option for those individuals on the go due to its convenience.