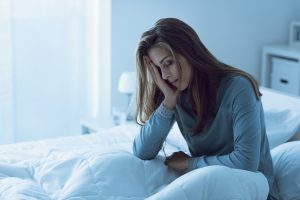 New research shows that insomnia may be a potential risk factor for brain bleeding from a ruptured aneurysm. According to the latest study published in the Journal of the American Heart Association, this risk factor comes along with other well-known risk factors, such as smoking and high blood pressure.

Worldwide, more than 3% of adults have unruptured blood vessel malformations in the brain, called intracranial aneurysms. The majority of these blood vessels will never rupture. However, about 2.5% of them will result in a subarachnoid hemorrhage (SAH), also known as a brain bleed.

SAH is a type of stroke that happens when a blood vessel on the brain’s surface ruptures and bleeds into the space between the skull and the brain.

Data from several genome-wide association studies were used to gauge genetic associations to lifestyle and cardiometabolic risk factors. According to the analysis, researchers found that a genetic predisposition for insomnia was associated with a 24% increased risk for intracranial aneurysm and aneurysmal subarachnoid hemorrhage.

Researchers did note that high triglyceride levels and high BMI did not show an increased risk for intracranial aneurysms.

This research supports previous findings on the associations between insomnia and intracranial aneurysm. The study supports the thinking that risk factors people can change or manage may impact brain aneurysms and hemorrhage risk.

The American Heart Association scientific statement summarizes how insufficient and poor quality sleep are linked to a higher risk of high blood pressure. The statement notes outlined that treating people with sleep disorders could provide clinical benefits, particularly for blood pressure, which we now know is a contributing factor for intracranial aneurysms.

Some study limitations included in this research were insufficient information to analyze some of the risk factors adequately. The analysis also only had people of European ancestry, so more research is needed to qualify these findings in other diverse racial and ethnic groups.