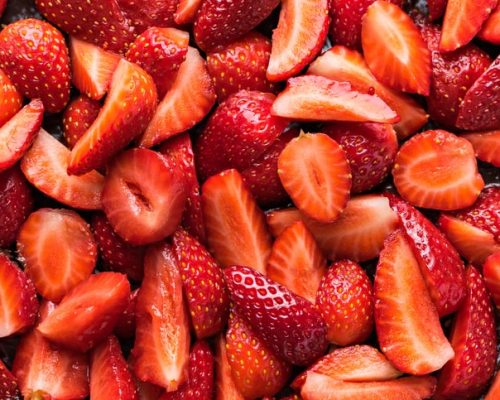 Inflammatory bowel disease (IBD) is an umbrella term that includes many conditions that cause inflammation in the bowels and are characterized by pain, severe diarrhea, and fatigue. Approximately three million people were diagnosed with IBD in the United States in 2015.

In the past, treatment options for the condition have been limited to medications or surgery, but recent research initiatives have focused more heavily on dietary factors that may influence the symptoms related to the conditions with the goal of improving gut health and decreasing inflammation in the bowels.

They found that the mice who consumed the human equivalent of ¾ of a cup of strawberries per day showed a significant reduction in inflammation in the colon. They also noted that those mice showed suppression of common symptoms associated with IBD, including loss of body weight and bloody diarrhea.

Diet is not the only lifestyle factor that is causing the increase in the prevalence of IBD worldwide, according to the researchers. “The sedentary lifestyle and dietary habits of many people in this country—high-sugar, high-animal-fat, but low-fiber diets—may promote colonic inflammation and increase the risk of IBD,” said Hang Xiao, the study’s lead. Controlling these aspects of our day to day routines may reduce our risk of developing IBD, but also help to manage the symptoms that occur with the condition.

Consult a Physician before Changing Your Diet

This study is unique in that it focuses on the consumption of the whole strawberry rather than extracts or purified compounds of certain fruits, which have been the focus of some of this research in the past. “But when you only test the purified compounds and extracts, you miss out on a lot of other important components in the berries, such as dietary fiber, as well as phenolic compounds bound to the fibers, that can’t be extracted by solvents,” said Yanhui Han, who helped conduct the study. This was important for the researchers behind this study, as these components of the fruit could be the reason for the significant impact that they noted in their results.

Currently, these findings only relate to mice populations and are not meant to be used as a guideline for changes to human diets. Future research will focus on how this dietary change impacts human patients with IBD and on uncovering the underlying mechanisms behind the relationship of strawberries to IBD symptoms. The researchers advise humans to always consult with their regular medical practitioner before making any significant changes to their diet.