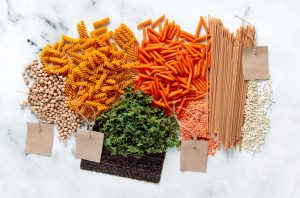 Gastroesophageal reflux disease is common and uncomfortable, but a GERD or acid reflux diet can help control symptoms.

GERD happens when acid flows back into the tube connecting your mouth and stomach. The acid reflux can be very irritating for the esophagus. It is believed that in the United States, about 20 percent of the population suffers from GERD.

Certain foods, which increase the amount of acid in the stomach, can lead to acid reflux and symptoms of GERD. Common food agitators include spicy and high-fat foods. There are also some foods that are good to eat if you suffer from GERD.

Acid reflux occurs when the lower esophageal sphincter becomes weak or damaged. While the sphincter usually closes to stop food in the stomach from moving into the esophagus, this doesn’t happen in those who suffer from severe acid reflux. A GERD diet can help people cope with this.

If you have been diagnosed with GERD, you should discuss an acid reflux diet with your doctor. Here are some foods that are typically included in a GERD diet.

Foods to Avoid in GERD Diet

Each person may have different triggers for acid reflux; however, there are certain foods that have a tendency to aggravate those who suffer from GERD. To help control symptoms, you can start eliminating foods one-by-one.

The following are GERD diet foods to avoid:

So now you have a sense of what might trigger acid reflux or GERD symptoms, but it can be hard to wrap your head around how to incorporate diet changes into your daily routine. Let’s take a look at what many people think of as the most important meal of the day (breakfast) and try to give you some idea of how to approach menu.

You should avoid the following when planning breakfast:

You can still enjoy a breakfast that is full of variety and that is acid reflux friendly. The following are sample breakfast menus:

Many people who have acid reflux find that having smaller meals, instead of a larger amount of food can help keep symptoms under control.

Aside from foods, there are other lifestyle adjustments you can consider if acid reflux is a problem. For example, you should avoid going to bed on a full stomach. Eating meals two to three hours before lying down can allow food to digest and lower acid levels. It is also important to control portions. Overeating can trigger GERD symptoms. Many gastroenterologists also tell their patients struggling with acid reflux to eat slowly.