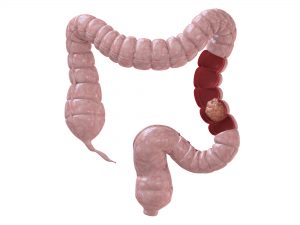 According to a study published in Cancer Research, vitamin D, already known for fighting inflammation, is now associated with lowering the risk of inflammatory bowel disease (IBD) and colon cancer. Conducted by a research team at the laboratory of Dr. Lillian Maggio-Price in the Department of Comparative Medicine at the University of Washington, the study — “Increased Dietary Vitamin D Suppresses MAPK Signaling, Colitis, and Colon Cancer”— gives a detailed analysis of the effects of vitamin D on bowel inflammation.

Spurred by previous studies that established a link between a decreased risk in inflammatory bowel disease, colon cancer, and adequate vitamin D, the team manipulated the diets of mice to include different levels of vitamin D.

For the study, the team used genetically engineered mice that lacked the gene SMAD3 to induce extensive colon damage. Prior to the study, these mice were exposed to Helicobacter bilis, to induce inflammation and colitis and eventually lead to colon cancer in a few months. This kind of an inflammatory response to gut bacteria closely mimics the inflammatory bowel disease in humans.

At the end of the study, the researchers found that the mice with high dietary vitamin D had reduced colitis, fewer immune cell infiltrates in their colons, decreased pro-inflammatory signaling pathway activity, and lower levels of inflammatory cytokines. More importantly, there was a fourfold decrease in risk for invasive cancer of the colon.

The team’s next goal is to determine how vitamin D is working to prevent inflammation. This will help them establish whether vitamin D can be used to prevent cancer of the colon in inflammation-associated colon cancer.

Over the years, many studies have been done to establish the link between inflammatory bowel disease (IBD) and vitamin D, and also to understand the Crohn’s disease and vitamin D deficiency connection. Based on these studies, it is evident that people with IBD are more likely to have low levels of vitamin D. Some researchers think that it is IBD that triggers low vitamin D levels (and not vice versa), because the symptoms of IBD force people to eat less and stay indoors.

In patients with IBD, vitamin D helps reduce the levels of inflammatory proteins that get overproduced. One such protein is called tumor-necrosis factor, or TNF. Blocking TNF production is an integral part of IBD management strategy.

Therefore, researchers think that vitamin D may be a natural way to help reduce inflammation in the digestive tract.

Now that the link between IBD and vitamin D is established, it is easy to understand why people who live in northern latitudes with less sunlight have an increased chance of developing IBD. Vitamin D is made in the skin from sunlight, and as these populations have less exposure to sunlight, their vitamin D levels are low and this in turn increases their risk of developing IBD.

Although IBD is not curable, having high vitamin D levels may help manage IBD, as well as reduce complications related to IBD, such as hospitalizations, surgeries, infections, and colon cancer. However, while link between low vitamin D levels and IBD is clear, more experiments need to be done to establish vitamin D’s role in preventing colon cancer.