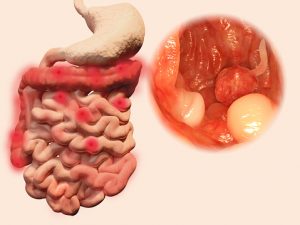 Inflammatory bowel disease-related colorectal cancer risk is raised by chronic inflammation and immunosuppressive therapy. The review was conducted by Dr. Laurent Beaugerie from Hôpital Saint-Antoine in Paris and Dr. Steven H. Itzkowitz from Icahn School of Medicine at Mount Sinai.

A previous meta-analysis study has found that an improved control of inflammation, along with frequent colonoscopies and the use of chemopreventive 5-aminosalicylates (5-ASAs), promoted a decrease in the higher risk for colon cancer in IBD patients. However, other studies have made conflicting conclusions with regards to the preventative effect of 5-ASAs.

Roughly 15 percent of colon cancers are diagnosed within the first seven years of IBD diagnosis. It is also well known that chronic inflammation plays a role in colitis-associated cancer.

Data on Crohn’s disease suggests that patients with Crohn’s have a 20 to 30 percent higher risk of bowel adenocarcinoma in ileal lesions after eight years of diagnosis, compared to the general public. The only preventative measure in Crohn’s patients is to remove the ileal lesions.


Inflammatory bowel disease and its link to colorectal cancer

Annually, 147,000 new colon cancer cases are diagnosed, leading to 57,000 deaths. Inflammatory bowel disease, like ulcerative colitis and Crohn’s disease, causes inflammation along any part of the digestive system from the mouth all the way to the anus. Individuals with IBD are at a higher risk of colorectal cancer, compared to the general public.

Common signs of colorectal cancer include:

If you have IBD and begin to notice these symptoms, speak with your doctor immediately to get tested for colorectal cancer to begin treatment right away.