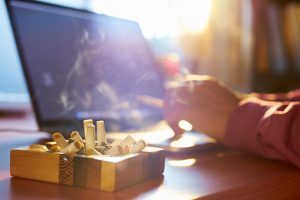 Air pollution levels expectedly rise in densely populated areas, such as big cities. Cars, power plants, and even landfills of garbage produce harmful substances that disperse into the air and potentially into your lungs. It’s natural to think that we’re safe from pollution in our homes, as we can close the windows. However, according to a new study, our household air quality may not be that much better.

Air pollution can introduce harmful particulates and biological molecules into the earth’s atmosphere which cause disease and allergies. Researchers at San Diego University were interested in finding out if the air quality in our home was any better.

Air pollution in our homes

The study in question involved nearly 300 families living in San Diego with one preteen and one smoker. They installed a pair of air particle sensors in each home. One was placed in the bedroom of the child and the other near smoking areas. Theses sensors continuously scanned the air for very fine particles, including dust, combustion byproducts, and auto emissions. Very small particles pose as increased risk for reaching deep into the lungs, leading to health complications.
The study lasted for three months. The researchers found that smoking cigarettes indoors caused the air pollution level to double compared to non-smoking homes. The particles contained nicotine and combustion by-products known for being hazardous. Marijuana smoke was also found to provide similar in-home air pollution risk. In addition, the use of cleaning products, candles, incense, and even frying food in oil all contributed to in-home air pollution.

“The aim of our research is, ultimately, to find effective ways to promote smoke-free homes and also to find good strategies, in general, for reducing exposure to household pollution. The findings from our work will allow for better education and feedback to families,” said lead author Neil Klepeis, an SDSU environmental health scientist.

The air quality in our homes is something we don’t really think about, but maybe we should. The research team wants to find effective ways to promote smoke-free homes and find strategies to reduce household pollution.