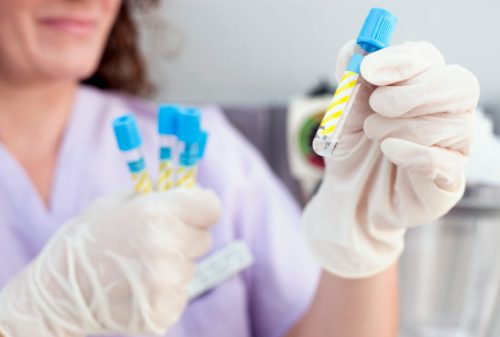 In celiac disease, early blood test screening may reduce future mortality risk. Celiac disease (CD) is characterized by gluten intolerance, and although the solution is as simple as avoiding gluten, many individuals do not get diagnosed, which can put their lives at risk. Doctors are now considering screening patients who show early signs and symptoms of celiac disease as well as individuals who are at high risk.

Professor Antonio Gasbarrini said, “This important research highlights the value of serological testing for CD in anyone with symptoms that might be due to the condition and in all asymptomatic individuals from high-risk groups. It is vital that we now start to take positive action across Europe to tackle this prevalent condition and reduce its serious health consequences.”

A celiac disease diagnosis is usually based on the presence of antibodies to gluten in the bloodstream along with a biopsy confirming inflammation of the intestine. “Celiac disease is readily treated with a gluten-free diet, so it is unacceptable that people suffer its symptoms for many years before they are properly diagnosed. We now have blood screening tests that are simple, safe, and accurate, and it is time we started using them effectively to limit the damage caused by this common condition,” added Professor Gasbarrini.

Professor Gasbarrini concluded, “Unfortunately, because the symptoms of CD are often vague and similar to those of irritable bowel syndrome, many people with CD are undiagnosed and many who are diagnosed will have waited 10 years or more for their diagnosis to be confirmed. At best, only around one-quarter of all CD sufferers are likely to have been diagnosed by a physician, leaving large numbers of people still at risk.”

In celiac disease, the immune system mistakes gluten for a virus or bacteria and so it wrongfully attacks it, causing symptoms like constipation, abdominal cramping, and much more. Furthermore, when gluten becomes attacked, it can cause damage in the intestines, especially to the areas responsible for absorbing nutrients. Over time, if gluten is continuously consumed, it can lead to damage resulting in malnutrition.

The current testing method involves taking a tissue sample after a person consumes gluten, but if you have stopped consuming gluten you will have to eat it again, thus undergoing the uncomfortable symptoms that follow in order to get your tissue examined to confirm a diagnosis of celiac disease. But now researchers have developed a simplified blood test to easily diagnose celiac disease.

Researcher Asbjørn Christophersen said, “When the food that you eat enters the small intestine, it is reduced to tiny fractions and presented to the T cells on so-called HLA molecules. The HLA molecules present various elements of what you consume, as well as what is inside the cells. The task of the T cells is to monitor cells to see if they are infected by viruses or bacteria. The T cells send a message to the other immune cells to attack not only the gluten protein itself, but also cells, and an enzyme that binds itself to gluten.” This causes the inflammation in the intestines.

When the test is approved, getting a celiac disease diagnosis will be as simple as seeing your family doctor, going for blood work, and waiting for the results from the laboratory. Christophersen added, “When we allow blood cells to flow through a magnetic column, the cells that react to gluten remain suspended in the column while all the other cells flow through it. We observe that celiacs have a much higher number of gluten-reactive T cells in their blood than non-celiacs. The level is more or less independent of how much gluten they eat.”

The researchers are now conducting a large scale clinical trial with three groups: those with celiac, healthy individuals, and undiagnosed individuals with symptoms of Celiac disease.

“This is the result of many years of basic research ‒ research which to all appearances has not directly helped patients. But based on this research, we have now reached a point where we can give something back to these patients. It is they who have given us blood and tissue samples over a number of years, and this has been crucial material for our research. The close collaboration with Professor Knut E. A. Lundin at UiO has been a prerequisite for this and many other studies conducted by Sollid’s research group. Without close contact and access to patients, it is also difficult to conduct basic research. Lundin has been a key figure in the development of the diagnostic test as well,” Asbjørn Christophersen concluded.