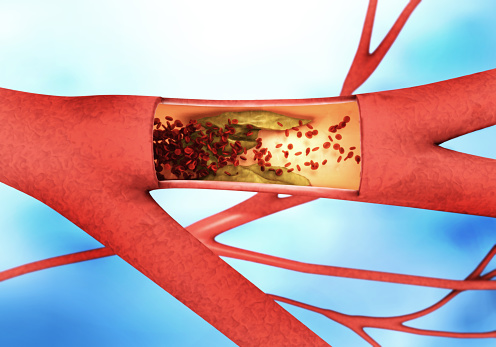 Coinvestigator of the study R.D. Gajulapalli, M.D., said, “People with celiac disease have some persistent low-grade inflammation in the gut that can spill immune mediators into the bloodstream, which can then accelerate the process of atherosclerosis and, in turn, coronary artery disease. Our findings reinforce the idea that chronic inflammation, whether it’s from an infection or a disease, can have an adverse role in coronary artery disease and heart health in general.”

Researchers examined medical records of patients from 13 different hospitals where 24,530 were diagnosed with celiac disease. Patients without celiac disease were the controls. Smoking status and diabetes prevalence were fairly the same across both groups. Celiac patients were slightly more inclined to have higher cholesterol, but less likely to have high blood pressure. Common risk factors for celiac disease include gender, race, diabetes, smoking, high cholesterol, and high blood pressure.

There was a slightly higher prevalence of coronary artery disease among celiac patients. Dr. Gajulapalli added, “This is an important study because it highlights a specific patient population who might be at higher risk for coronary artery disease, even in the absence of traditional cardiovascular risk factors. We were surprised by the strength of the association, especially in younger people. Patients and doctors should be aware of this association.”

Larger studies are required in order to confirm the findings as well as examine how the severity of celiac disease affects the risk of coronary artery disease.

An alternative study uncovered that celiac patients may be at an increased risk for ischemic heart disease, even if the patients lack traditional risk factors for the condition.