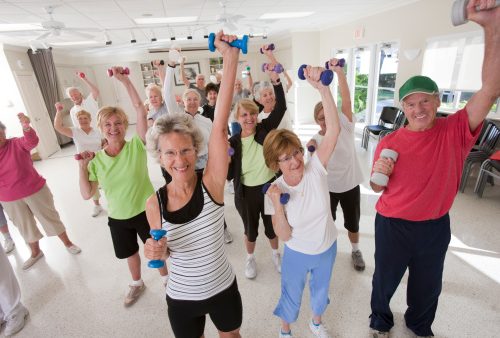 Researchers found seniors who improved their fitness also counteracted brain atrophy – a condition where the brain experiences a loss of neurons and the connections between them. An increase in fitness found that the thickness of the brain’s cortex improved. The results were seen in healthy older adults and those with mild cognitive impairment (MCI).

Senior author, Dr. J. Carson Smith, said, “Exercise may help to reverse neurodegeneration and the trend of brain shrinkage that we see in those with MCI and Alzheimer’s. Many people think it is too late to intervene with exercise once a person shows symptoms of memory loss, but our data suggest that exercise may have a benefit in this early stage of cognitive decline.”

Participants, between the age of 61 and 88, were previously inactive and put on an exercise regime that included moderate intense walking on a treadmill four times a week over the course of 12 weeks. Cardiorespiratory fitness improved eight percent on average among the participants.

Brain atrophy is a marker of Alzheimer’s disease progression and correlates with symptoms of mild cognitive impairment. Those who showed the greatest fitness improvement also had the most growth of the cortical layer. Those with MCI saw greater improvements compared to healthy individuals in the left insula and superior temporal gyrus – brain regions shown to reveal accelerated Alzheimer’s progression.

Dr. Smith also noted that older adults with exercise intervention improved their memory recall, so the new findings further support the power of exercise on brain function. Other research from Dr. Smith revealed just 30 minutes of exercise a day can ward off brain shrinkage as well.

This is the first study to reveal a link between exercise and cortical thickness in those diagnosed with mild cognitive impairment. The pending question is, Can regular moderate intensity exercise reverse the delay of cognitive decline and keep older adults out of nursing homes?

The findings were published in Journal of the International Neuropsychological Society.