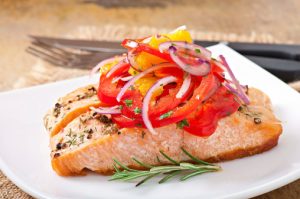 The Mediterranean diet has been shown to reduce brain cell loss (cerebral atrophy) in old age. Researchers have uncovered that consuming too much meat may actually shrink your brain, but consuming a diet similar to the Mediterranean style can help keep your brain healthy into old age. The findings suggest that those over the age of 65 who consumed more fish, fruits, vegetables, grains and olive oil, had larger brain volume, compared to those who did not follow the diet.

Study author, Dr. Yian Gu, said, “It was encouraging to see that the more you adhere to this Mediterranean diet, the more protection you get against brain atrophy [shrinkage]. For people interested in the diet and lifestyle factors leading to better health, I think this is another study consistent with previous studies that indicate the Mediterranean diet is a healthy diet.”

Gu did point out that the study does not point to a cause and effect between diet and brain volume. The study mainly revealed an association between the two.

In previous studies, the Mediterranean diet was revealed to be beneficial in preventing Alzheimer’s disease. The Mediterranean diet consists of fish, fruits and vegetables, legumes, cereals and monounsaturated fats, such as olive oil. It’s also important to minimize red meat consumption, dairy products and alcohol.

Gu and her team split 674 adults into two groups based on how close their diets were to the Mediterranean diet. Each individual underwent a MRI scan to measure brain volume and thickness. Questionnaires were also filled out to obtain information regarding their diet and eating patterns.

In those who did not follow the Mediterranean diet, the researchers found smaller brain volumes, which equated to a difference of five years of aging.

Dr. Joseph Masdeu, from the Nantz National Alzheimer Center at Houston Methodist Hospital, commented, “I think the take-home message is clear . . . a diet containing less meat and perhaps more fish is good for you. There are negative studies [focusing on] the Mediterranean diet as well, but several confirming a positive effect. So it’s tentative, but it’s the strongest preventive approach we have [promoting brain health] together with exercise.”

Gu recommends consuming three to five servings of fish each week and limiting other meat to 3.5 ounces a day for optimal brain protection.

Dr. Malaz Boustani from the American Federation for Aging Research said, “This is an encouraging study that will really make us work harder to see how we can actually encourage people . . . to change their diet to accommodate the Mediterranean diet.”