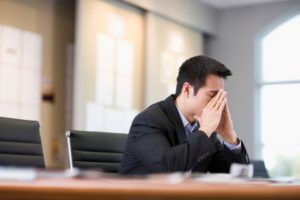 We encounter stress on a daily basis, when we are stuck in traffic or waiting in the long lineup at the grocery store, for example. Stress can vary greatly from mild to severe and chronic. Numerous studies have shown the detrimental effects of stress on the body, as it causes headaches and stomach aches, raises blood pressure, lowers libido, and weakens the body’s immune system, making it harder to fight off illness. A new study has shown that chronic stress may even be robbing you of your precious memories.

The findings come from Ohio State University where researchers explored the role of chronic stress on cognitive impairment by studying mice. The mice study could potentially lead to treatment options on preserving memory in cases of prolonged stress.

Lead researcher Jonathan Godbout said, “This is chronic stress. It’s not just the stress of giving a talk or meeting someone new.”

The researchers found that mice who were repeatedly exposed to aggressive intruders had a greater difficulty in recalling how to escape a maze, which they previously mastered. Godbout added, “The stressed mice didn’t recall it. The mice that weren’t stressed, they really remembered it.”

The researchers also noted measurable brain changes, including inflammation triggered by the immune system. “It’s possible we could identify targets that we can treat pharmacologically or behaviorally,” said Godbout.
John Sheridan, who also worked on the study, suggested that there may be ways to interrupt the inflammation.

The mice were subjected to repeated social defeat in the presence of alpha-mice in order to replicate chronic psychosocial stress experienced by humans.

The researchers wished to uncover the secrets behind stress and cognitive impairment as a means to help those with anxiety, depression, and post-traumatic stress disorder.

The researchers found that the stressed mice had difficultly with spatial memory that resolved within 28 days. The mice displayed social avoidance – which is similar to depressive-like symptoms – that continued for four weeks.

The researchers were also able to measure the development of new neurons 10 to 28 days after the stress ended.

The mice were given a chemical that inhibited inflammation, but the brain-cell problem or the depressive-like behavior did not go away. On the other hand, memory loss and inflammatory macrophages disappeared.

The findings helped researchers conclude that post-stress is directly tied to inflammation as opposed to direct damage to the brain. The findings can help pave a path for immune-based treatments.

Sheridan said, “Stress releases immune cells from the bone marrow and those cells can traffic to brain areas associated with neuronal activation in response to stress. They’re being called to the brain, to the center of memory.”

Until treatment is developed, it’s best to properly manage chronic stress and seek help for stress, anxiety, and depression to minimize the inflammatory response by the immune system in order to preserve memory.