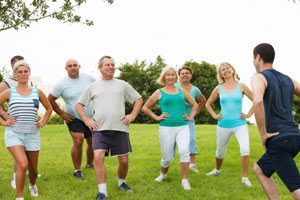 If you need a pep-talk to get up and get moving, this is definitely it.

Exercise is important, that much we know. More and more research reveals the vast and varied effects that exercise has on our bodies. Now we’ve linked physical activity with healthy brainpower.

As we age, it seems as though we become more forgetful, our minds become a bit foggy, and we attribute all this simply to aging. Well new research, published in Neurology, suggests the more active we can be, the more we can support our brain health and keep our minds clear in our senior years.

A closer look at exercise and the brain

The study, conducted by researchers from Chicago’s Rush University Medical Center, involved 167 participants with an average age of 80. They were asked to wear movement monitors so that researchers could track their exercise and non-exercise activity over a period of 11 days.

Participants’ ability to move was also examined, and MRI scans of the brain were used to assess the volume of white matter hyperintensities (WMH) – small areas of brain damage – typically found in an older person. WMH’s have long been associated with impaired motor functioning, and show up in activities like walking.

In all participants, 10 percent were found to be more physically active than participants at what was considered the 50th percentile of activity levels. That’s the equivalent of walking for an additional 1.5 hours each day at a speed of around 4 km/h. For the most active, greater volumes of WMH didn’t seem to affect the scores of their movement tests.

Previous studies in both humans and animals revealed that physical activity was behind enhanced blood flow, the production of new blood vessels and the improved maintenance of the circulatory system in the brain.


Effects of physical activity on brainpower

So what did scientists learn ultimately? For one thing, they saw no reduction in participants’ movement, even when magnetic resonance imaging (MRI) showed that they had high levels of age-related brain damage.

These results demonstrated the importance of exercise, and a more active lifestyle in general for older people when it comes to preventing mobility issues. What’s more, exercise was shown to make networks in the brain that much more resilient.

Of course, the findings are limited by the use of what’s called cross-sectional measures, so further scans will need to be collected from the study participants. This will allow researchers to report on physical activity, levels of brain damage and long-term changes to motor functioning. Still, given the high prevalence of WMH – even in middle-aged individuals – interventions that seek to stabilize and better your movements should be performed as much as possible.

Lace up your walking shoes and get out there!

As the boomer population ages, mobility issues will be even more of a public health challenge. But as the latest study shows, increased exercise could protect motor function from the adverse neurobiological effects of aging.

So if you’re a senior, make sure your lifestyle is as active as possible. And if you’re already a healthy older person, well, keep up with the pilates!

This popular exercise won’t solve your health problems after all