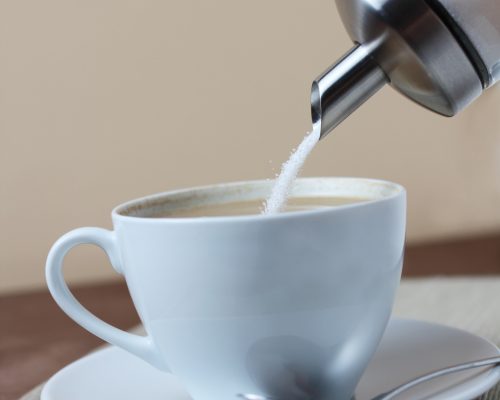 How much sugar or sweetener did you add to your tea or coffee this morning? No matter what your preferred style of sweetening up your morning beverage, a newcomer to the market could eliminate the need for either.

A new “sweetness enhancer” has been produced by San Diego-based Senomyx and exclusively licensed by PepsiCo Inc. for use in nonalcoholic beverages. Sweetmyx is said to enhance the flavor of all other sugars. Now soda companies can start making their lower-sugar drinks taste that much sweeter, with the added bonus of far fewer calories. Not that I’m a proponent of drinking soda, but the average American consumes 44 gallons of the carbonated stuff per year; clearly there’s a market for making it “healthier” with less calories but that same addictive sweet taste.

Sweetmyx is a substance that tricks your brain into thinking a food or drink is sweeter than it is. It can’t fully replace a sweetener, but it can reduce the amount needed to generate the same level of sweet taste. What the substance is, exactly, remains a mystery; the composition of Sweetmyx is a trade secret.

RELATED READING: Don’t be fooled by these ‘All Natural’ labels

But don’t call it sweetener!

The creators are quick to point out that Sweetmyx is not a sweetener; it is a “sweetness enhancer.” The difference lies in the subtle claims of each additive: Sweetmyx enhances the taste while a “sweetener” artificially replaces the sweet taste. You might need to be your own judge and jury on this one whether one is truly any better than the other. They’re both artificial substances – you’d be better quenching your thirst with a tall glass of water with a twist of lemon.

For the most part, food and drink with artificial or non-nutritive sweeteners are designed so you can still enjoy a sweet taste and help curb your cravings for sugar. For most low-calorie sweeteners, the sweetness enhancement is an estimated 100 times more intense than regular sugar, so only a small amount is needed.

One of the problems with sugar substitutes is that they’re not recognized by your body and can’t be broken down. Instead, they pass through your system without ever being digested. Not only this, but foods labeled as “sugar-free” or having “reduced sugar” are not without calories and carbohydrates, too.  Plus, “fake sugars” like aspartame, sucralose and saccharine have been linked to a number of diseases, including cancer, heart disease and, ironically, diabetes.

The Food and Drug Administration (FDA) said Sweetmyx has not been approved because of a discrepancy with the red tape surrounding food additives. But you may have heard otherwise. The FDA issued a news release several days after reports hit the media giving consumers the clear indication the additive had skated through the FDA’s approval system without an issue.

As Bloomberg reports, PepsiCo Inc. has signed an exclusive deal with Senomyx, the maker of Sweetmyx, to use the sweetness enhancer. But because of current regulatory gaps within the FDA, what is considered “generally recognized as safe” (also known as the GRAS rating) is an internal flaw that means the sweetness enhancer could hit the market without approval from the FDA.

Given how the substance has been classified, Sweetmyx doesn’t require a go-ahead by the FDA, just an independent panel review – which might not give you much peace of mind when it comes to safety. Sweetmyx could be on the market in your Pepsi beverages later this year.  Buyer-beware!

RELATED READING: Not so sweet truth about sugar and your heart

Sugar, natural or not, has dietary effects

When it comes to sugar, there’s a lot to know. There are two types of sugars in American diets: Added sugars and naturally occurring ones. Added sugars, or sweeteners for that matter, can be found in soda and fruit drinks, candy, cakes, cookies, pies, dairy desserts and sweetened milk products such as ice cream.

Naturally occurring sugars (the better kind), are found in traditionally healthier and natural foods, like fruit and milk.

Americans eat a lot more sugar than they might be aware of, according to the American Heart Association. I’m not surprised. Sugar is hiding in so many foods that you’ve got to read those nutrition labels and be on the lookout for sucrose, corn syrup, honey, high fructose corn syrup, fruit juice concentrates and dextrose.

But added sugar is something that our bodies don’t require to function properly. We process the natural sugar found in fruits and vegetables, for example, into energy, but added sugars don’t do us any favors.

My advice? Try to say away from added sugars and flavor enhancers, and so on, in processed foods. If you’re bound to have it, limit added sugar to no more than half of your average daily calories. For men, that’s about 150 calories a day or nine teaspoons. It’s an even smaller amount for women: No more than 100 calories per day from added sugar or about six teaspoons of sugar.