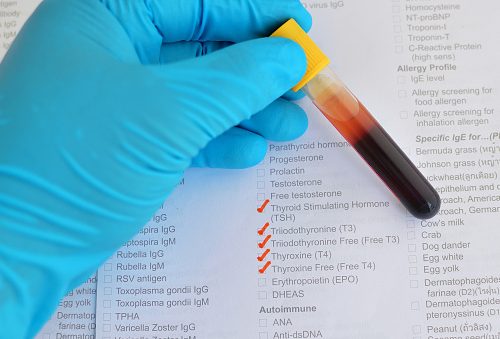 The authors concluded, “These findings imply that SCH may be a new therapeutic target to prevent the development and progression of renal disease in diabetes patients. Thyroid function screening should be offered to diabetes patients with diabetic nephropathy.”

Diabetic nephropathy means kidney disease in which diabetes is the cause of damage to the kidneys. High blood sugar over time can result in damage to the kidneys, as it causes them to overwork. As a result, they are unable to perform their job. When the kidneys stop working entirely, this is known as kidney failure.

In early stages, symptoms are not present, which increases the risk for the condition to worsen without a patient’s knowledge. It’s important to go for regular urine tests to monitor the kidney function and to catch diabetic nephropathy early on before complications arise.

To test for diabetic nephropathy, doctors will look for albumin in the urine because urine doesn’t typically contain protein (which albumin is). Normally, if your kidneys are functioning, they will properly filter through waste and urine, so protein is not released. If your kidneys are malfunctioning, protein is then released, signaling a problem.

As damage to the kidneys worsens, patients will also notice an increase in blood pressure and cholesterol, so medications may be required in order to control these factors.

If you are diabetic, it’s important that you maintain healthy blood sugar levels as best as possible in order to avoid any diabetes-related complications.

As kidney function declines, blood sugar levels may also drop because the kidney cannot remove excess insulin. Be mindful of any changes to your health especially if you’re diabetic, as diabetes is associated with many other health complications as well.

Hypothyroidism (underactive thyroid) raises the risk of type 2 diabetes, according to a new study. The findings revealed that the risk still remained even in those patients who had their hormone levels under control. Continue reading…