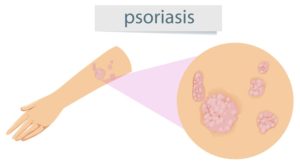 Psoriasis is a skin condition that has more recently become well-known to the public due to certain celebrities and public figures speaking out about it, including Kim Kardashian. It causes rashes and patches of dry, scaly skin on the body. The causes of the condition still remain mostly a mystery, but scientists hypothesize that it is a result of autoimmune reactions in the body. This causes the immune system cells to attack areas of healthy skin, causing inflammation.

Past research has discovered that people who suffer from psoriasis are at a higher risk of developing high blood pressure (hypertension), diabetes, and obesity. These conditions are all characterized by the same kind of inflammation talked about earlier which can contribute to the build-up of fatty plaque in the arteries. This is known as one of the leading causes of heart disease.

A new study examined whether the combination of psoriasis and hypertension in patients would lead to worse cardiovascular outcomes than those without the conditions and those with only one of them. The researchers gathered data on patients with hypertension from the Taiwan National Health Insurance Research Database. On average, the participants were 58 years old. Approximately 4,000 of these patients also suffered from psoriasis.

The findings of this study support the canon of research that exists around this topic, in finding that there are immunological mechanisms in common between psoriasis and hypertension, which lead to worse outcomes for cardiovascular events in these patients. The researchers urge medical practitioners to test psoriasis patients for hypertension, and vice versa, so that this at-risk group can receive optimal treatment to reduce their risk for needing surgery as an intervention for any cardiovascular conditions that could arise as a result.

There is currently no cure for psoriasis but changing certain aspects of your lifestyle and diet can help to reduce the severity of symptoms. Maintaining a healthy lifestyle can also help to reduce the risk of cardiovascular events and high blood pressure, and so is doubly recommended for those with psoriasis who also suffer from hypertension, particularly after the current findings linking the two conditions even further.