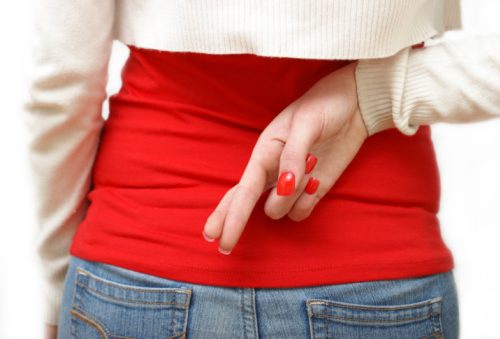 The researcher investigated 110 participants, ranging in age from 18-71 from a variety of backgrounds. Half of these participants were told to refrain from telling lies (both major and minor) for 10 weeks. The other half weren’t given any instructions specific to lying. Participants were evaluated each week in the lab with health and relationship questionnaires as well as polygraph testing to assess the number of minor and major lies that they had told each week. When individuals in the no-lie group told three fewer minor lies than in previous weeks they reported less headaches, sore throats, tension, stress and anxiety, and other health problems than those that were in the control group.


The Stress on Your Mental Health

Not only did the participants who lied less experience less mental health and physical health problems, they also reported improvements in their close personal relationships and social interactions. Lying can have a significant impact on your mental health as it can cause an unwanted increase in stress. Stress can lead to a number of physical and mental health problems including: headaches, muscle tension, fatigue, stomach and sleep problems, anxiety, irritability, and depression among many others. Additionally, stress can lead to adopting unhealthy behaviours such as drinking, smoking and drug use. Reducing stress is an important step towards living a healthy life. Being as honest as possible and refraining from telling lies, even minor ones, may have a direct impact on your stress level.

Previous research has shown that Americans, on average, lie approximately 11 times per week. The severity of the lies ranges from “white” lies such as excuses for being late, to major lies that involve serious matters such as fidelity and finances. This research shows that cutting back on the lies that you tell on a daily basis can have a profound positive effect on your mental health so it’s in your best interest to be honest

In addition to eating healthy and exercising regularly for optimal health, you may want to start applying this new health trend by reducing the number of lies you tell. The goal doesn’t have to be to never tell a lie, you just need to significantly reduce the number of lies you tell to experience the physical and mental health benefits of this new health trend.

Related Reading: How your fibbing is harming your health