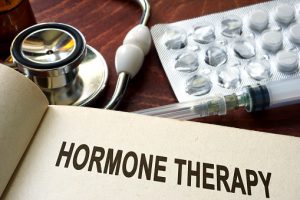 All women, granted they are in good health, are able to have children. However, the gift of childbearing can feel like a burden, as every month, females have to go through their menstrual cycle and the only relief comes after menopause. This transition period can be the source of much anguish in the female community, as experiencing hot flashes, extended periods of insomnia, and mood changes can make them quite irritable and unhappy. Medication in the form of hormone replacement therapy does exist, however, which has been touted as the most effective treatment for menopausal symptoms, but new research suggests that it may increase the risk of hearing loss in older women.

Menopause is the natural decline of reproductive hormones in the female body, with estrogen taking the biggest hit. This hormone is involved in female maturation as well as regulating menstrual cycles. As women approach their late 30s, the ovaries start to produce less estrogen, and as a result, fertility declines. When females reach their 40s and 50s, their menstrual periods become less frequent until they stop altogether. The mid-50s is when menstrual symptoms typically appear.

Knowing the physiology behind menopause has made estrogen a prime candidate for relieving menopausal symptoms. Estrogen supplementation will not increase fertility, however, as that is tied to age. A low dose of estrogen has been found to provide symptom relief but is generally avoided depending on family and personal history of estrogen-based cancers, such as various forms of breast cancer. Regardless, hormone therapy has been shown to prevent bone loss, benefit the heart, and decrease the frequency of hot flashes. New findings suggest that it may also increase the risk of hearing loss, with a large study examining independent relations between menopause and postmenopausal use of hormone therapy and the risk of self-reported hearing loss.
The study in question involved 80,972 women who reported hearing loss. The researchers found that the use of oral hormone therapy in postmenopausal women for long durations was associated with a high risk of hearing loss. Women who went through natural menopause at an above average age were seen to be at the highest risk, with the mechanisms for this association being uncertain.

“The finding from this observational study that women who underwent menopause at a later age and used oral hormone therapy had greater hearing loss was unexpected but should lead to more testing in a randomized, clinical trial. Information about the potential effect on hearing is important to include in a discussion regarding the risks and benefits of hormone therapy for symptomatic menopausal women,” says Dr. JoAnn Pinkerton, North American Menopause Society executive director.

How long does menopause last?