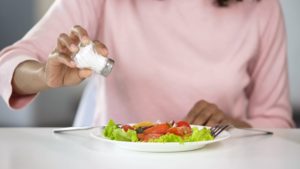 A new study has confirmed a definitive link between salt and bloating. America has a high prevalence of bloating, and this new research published in the American Journal of Gastroenterology shows that it can be reduced simply by lowering sodium intake.

The study was conducted by researchers at the Johns Hopkins Bloomberg School of Public Health, and re-analyzed data from a large clinical trial the Dietary Approaches to Stop Hypertension-Sodium trial (DASH-Sodium). This trial was conducted two decades ago and found that high sodium intake increased bloating among trial participants. The researchers also showed that a high-fiber diet such as the DASH diet increased bloating among participants compared to a low-fiber control diet.

The study was led by author Noel Mueller, Ph.D., MPH, an assistant professor in the Department of Epidemiology at the Bloomberg School. He spoke about the research saying, “Bloating is one of the leading gastrointestinal complaints in the U.S. and can be exacerbated in some people by a high-fiber diet; our results suggest that they might be able to reduce that bloating, without compromising on healthy fiber, by lowering their sodium intake.”

Mueller and his team analyzed the results from the DASH diet trial. The trial took place at four clinical centers during 1998–99, testing the high fiber diet which is relatively low in fat and high in fruits, nuts, and vegetables, against a low-fiber control diet. There were 412 participants who all had high blood pressure at the start of the trial.

The initial trial was set up to determine the effect of dietary sodium and other factors on blood pressure. It did include data on participants’ reports of bloating. This is the information that Mueller and his colleagues analyzed for the new study.

They found that prior to the trial, 36.7 percent of the participants reported bloating, which is more or less in line with national surveys of bloating prevalence. But they also found that the high-fiber DASH diet actually increased the risk of bloating by approximately 41 percent compared to the low-fiber control diet. It was also noted that men were more susceptible to this effect, compared to women.

The key to this research is that a reduction in sodium can be an effective way to reduce bloating, and in particular, it may be able to help people maintain a healthy, high-fiber diet.

“We hypothesize that sodium intake also alters the gut microbiome in a manner that modifies bacterial sulfide production,” Mueller says. Because of this, the connection between why sodium causes bloating is still being studied. Salt causes water retention, and that may be one factor.

Gastrointestinal bloating is a serious problem in North America, affecting up to a third of U.S. adults. It also affects more than 90 of those living with irritable bowel syndrome. Bloating is generally known as a buildup of excess gas in the gut. The production of gas is usually attributed to gut bacteria breaking down fiber in the intestinal tract.

Meuller and his team are now researching how bloating is affected by the major dietary macronutrients: protein, carbs, and fat. But his new information about salt and bloating offers help to those wanting to stick to a high-fiber diet, but who were being discouraged by bloating. By reducing the amount of sodium on the high-fiber diet, bloating should diminish.