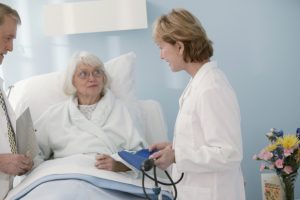 Some people may assume their loved one has Alzheimer’s disease, but with Alzheimer’s the brain’s nerve cells break down, which is a different situation. Even though these two brain disorders have a different pathogenesis, it is possible to have vascular dementia and Alzheimer’s at the same time.

Lead author Prof. Kazem Rahimi explained, “Vascular dementia rates are increasing all over the world and will pose a significant economic and social burden in both developed and developing countries. So these results are particularly important. We already know that high blood pressure can raise the risk of stroke and heart attack. Our research has shown that high blood pressure is also associated with a significantly higher risk of vascular dementia.”

Prof. Rahimi added, “Our results suggest that lowering blood pressure, either by exercise, diet, or blood pressure lowering drugs, could reduce the risk of vascular dementia.”

A diagnosis of dementia can be devastating for patient and their family. Sadly, there are few of us today that can say we have not known or heard about someone with dementia.

As people age, many do tend to worry about dementia. Understanding the risk factors can be helpful. For instance, there are some conditions that can damage blood vessels, which can increase your risk of vascular dementia. A person’s risk of developing the condition doubles every five years after the age of 65, so clearly age is a risk factor. Below we list a few other potential risk factors.

History of stroke or heart attack: These events can cut off blood flow to the brain. High blood pressure, smoking, and high cholesterol are also contributors.

Hardened arteries: Cholesterol and plaque deposits in arteries can build up and hinder blood flow, which of course can lead to a stroke or a heart attack.

Contributing conditions: Research suggests that diabetes, lupus, abnormal heart rhythm, being overweight in mid-life, and even sleep apnea could increase the risk of dementia.

Genetics: Some experts believe that common types of vascular dementia may be linked to certain genetic factors. For example, someone with a family history of stroke, heart disease, or diabetes may have an increased risk.

Studies seem to indicate that people from certain ethnic backgrounds are more likely to experience cardiovascular disease and vascular dementia than others. One U.K. study showed that Indians, Bangladeshi, Pakistani, and Sri Lankans tend to have a higher rate of stroke, diabetes, and heart disease than white Europeans. It has been suggested that the difference could be due to lifestyle factors, such as diet and exercise.
Treatment for vascular dementia is different for each patient, but often involves addressing underlying problems. For instance, if the patient has diabetes, high cholesterol, or high blood pressure, then those conditions are treated. There are some medications that are used to slow the progression of memory-related diseases. However, sometimes, natural treatment is the first course of action for vascular dementia. Options include an exercise routine, a new diet, and a weight loss plan. There are even some symptoms of vascular dementia that can be managed through physiotherapy, occupational therapy, or speech therapy.

Cognitive therapy is another natural treatment. It helps stimulate thinking skills and engages the person who is suffering from dementia. Many people with dementia suffer from anxiety, and cognitive therapy that involves group-based games, emphasizing enjoyment and laughter, can be very helpful to some of these sufferers.

There are other steps that can be taken to help improve quality of life for a person who is struggling with vascular dementia. Family and friends can help by placing notes in visible locations to remind the dementia sufferer about certain plans or instructions. They can remind the person what day it is or talk about what is going on the world. It’s important that those with vascular dementia still feel connected to people and the society they live in.

Unfortunately, there are currently no treatments to stop or reverse the changes that are caused by vascular dementia. On the upside, though, now more research is being conducted than ever before on potential causes and new treatments for this life-altering disease.