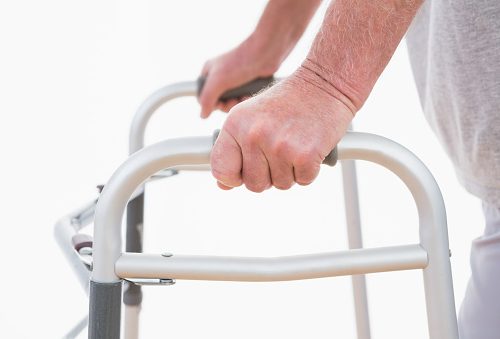 Having chronically high blood pressure (hypertension) can eventually lead to problems like heart disease, which is one of the world’s most common causes of death. But according to a study at Oregon State University, elevated blood pressure was not found to be a high mortality risk for elderly individuals with a weak grip.

Blood pressure is the force of blood against vessel walls and is typically measured in millimeters of mercury. Values are given in two values: one for systolic blood pressure (top number) and the other for diastolic (bottom number), meaning the force during a heartbeat and the force during rest, respectively. Systolic blood pressure commonly rises as we get older, and diastolic shows a slight decline. A diagnosis of hypertension increases the risk of heart attack and stroke.

The researchers wanted to show that the relationship between high blood pressure and the risk of death is largely dependent on frailty status. They want more physicians to focus less on hypertension in patients who are out of shape, as those with well-controlled hypertension that still function at a high physical level are seen to be less at risk with respect to the negative consequences of the disease. The commonly provided regimen of simply treating all older patients with anti-hypertensive medication may not be the most optimal treatment method.

“If people are very frail, they typically don’t respond well to anti-hypertensive therapy and they are not benefiting from having a low blood pressure,” said lead author Chenkai Wu, a graduate student in OSU’s College of Public Health and Human Sciences. “The research is basically saying older adults are not one single group, they’re very different in terms of their health status, and drugs may not have the same benefits for everyone. This is consistent with the idea of precision medicine, where you don’t just look at age, you look at other things like functional status.”
The study looked at elderly individuals to determine if blood pressure medication was warranted with respect to the level of physical functionality. They achieved this by assessing grip strength using a dynamometer, a common way of gauging functionality in the elderly. Walking speed—also a good measure of functionality—was also analyzed. Data from 7,492 people age 65 or older showed that elevated systolic and diastolic blood pressure correlated with a significantly higher chance of dying for those found to have normal grip strength (26kg for men, and 16kg for women). Looking at a combination of both grip strength and walking speed found the strongest inverse association between high blood pressure and mortality was for slow walkers with weak grip strength.

The science behind why high blood pressure occurs as we get older may be partly due to our blood vessels losing their elasticity as we age, becoming stiff, and as a compensatory mechanism, the body increases blood pressure to keep oxygenated blood pumping to vital organs, like the brain and heart.

“Everyone ages differently — there is a profound difference between the physiological age of an 80-year-old man who golfs every day and someone who needs a walker to get around. So with fast walkers, high blood pressure may be more indicative of underlying disease and not just a symptom of the aging process.” said Michelle Odden, OSU public health epidemiologist and senior author on the study.

Related: What causes low and high blood pressure after exercise?