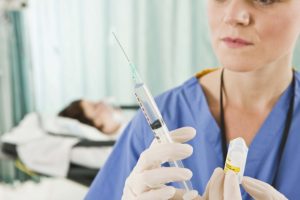 Hepatic encephalopathy (HE) is a condition in which the liver cannot remove toxins found in the blood. It results in a loss of brain function and can lead to liver failure. This neuropsychiatric syndrome is caused by metabolic abnormalities. The liver is unable to remove and break down toxins found in blood either because it is damaged or because the blood does not circulate properly in the liver.

Often, if liver health improves, hepatic encephalopathy may be reversed. This can be done by treating the liver condition or increasing blood flow. Consequences of prolonged HE can result in a coma or even be fatal.

One of the many jobs your liver performs is filtering the blood to remove harmful chemicals produced by the body.

In hepatic encephalopathy, your liver becomes sick as a result of a chronic disease such as hepatitis, Reye’s syndrome, or cirrhosis. When your liver is damaged, it cannot perform its function of removing chemicals from the blood, so these toxins can travel through the bloodstream and to the brain. This build-up of toxins then causes symptoms, both mental and physical.

Triggers of a hepatic encephalopathy include a shunt in the liver; infection; constipation; dehydration; bleeding from the intestines, stomach, or esophagus; taking certain medications like sleep aids, pain relievers, or water pills; kidney problems; or binge drinking alcohol.

There are three main types of hepatic encephalopathy: acute, chronic, and chronic cerebral degeneration and myelopathy.

Acute encephalopathy: Rapidly progresses over a short time span. This is a complication of acute liver disease and is a sign of terminal liver failure. It is commonly found in patients who have acute fulminant viral hepatitis, toxic hepatitis, and Reye’s syndrome (the syndrome causes swelling of the liver and the brain).

Chronic encephalopathy: Occurs multiple times and requires long-term treatment to minimize and prevent symptoms during intervening periods. Cirrhosis patients who have extensive portal collateral circulation and/or shunts typically experience this type of HE. In this case, patients have redundant circulation to their organs, meaning, the blood can travel in different pathways to the same spot. In-between episodes, chronic HE may be mild and symptoms may not be noticeable. Chronic HE is a sign of deterioration caused by cirrhosis, a liver disease resulting from alcoholism and hepatitis.

Chronic cerebral degeneration and myelopathy: Possible permanent neurological abnormalities that don’t respond well to treatment. It can affect a person’s ability to walk or stay balanced. It is quite rare. Tremors similar to those in Parkinson’s disease may be present.

Stage 1: Symptoms in this stage affect sleep patterns and may include anxiety, depression, and restlessness.

Stage 2: Personality changes can occur in stage two. The ability to complete mental tasks is impaired and disorientation occurs.

Stage 3: Behavior becomes bizarre, aggression and rage are present, speech becomes harder to understand. and there is a sense of paranoia.

Risks and symptoms of hepatic encephalopathy

The liver’s main role is to filter out toxins from the body. These toxins could be introduced by environmental factors, diet, and even the medications we take. When the liver is healthy, it can filter our these toxins without problems. But a sick and damaged liver cannot complete this function, which results in a toxin buildup.

To avoid HE, people should take care to maintain a healthy liver. Avoid used needles, minimize alcohol intake, and maintain a healthy weight to protect your liver. There are other triggers that can increase one’s risk of developing HE, as well. They include:

Early stage symptoms of HE

These symptoms can be seen in early stages of HE, but as the illness progresses, so do the symptoms.

Severe symptoms of HE:

Depending on the severity of symptoms, patients with HE have trouble caring for themselves and often require the assistance of a caregiver.

To properly diagnose hepatic encephalopathy, your doctor will need a complete blood count. A low red blood count can indicate a lack of oxygen. Your doctor may also measure levels of potassium, ammonia, and sodium, as high levels of these indicate impaired liver function.

Other diagnostic tests include imaging tests like CT scans or MRI to check for bleeding in the brain as well as liver function tests. Raised liver enzyme levels can indicate added stress or damage to the liver.

Treatment for hepatic encephalopathy depends on the severity and the underlying cause. For starters, you will be advised to consume less protein in your diet. Your doctor will help you adhere to a diet that reduces protein but ensures you still get adequate amounts to function properly. High protein foods to avoid include poultry, red meat, eggs, and fish.

Your doctor will also prescribe medications to help slow down the rate of absorption of toxins by the blood.

In severe cases, you may require a ventilator if a patient has difficulties breathing.

Here’s what you can do to prevent hepatic encephalopathy:

By following these prevention tips, you can have greater success in reducing your risk of hepatic encephalopathy.