Home » Joint Health » Hemarthrosis: What causes bleeding in the knee and how to treat it 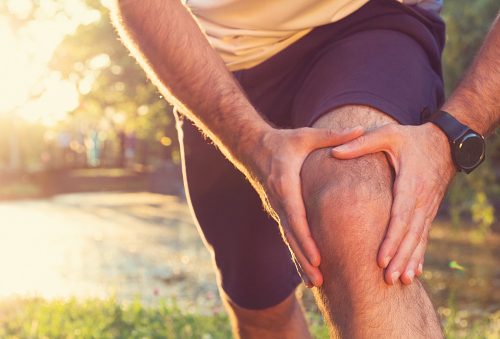 Hemarthrosis or articular bleeding is hemorrhaging inside joints, which can cause extreme swelling and pain. The knee is one of the most common areas affected by hemarthrosis, and if it goes untreated, it can lead to permanent damage. Here we take a look at what leads to bleeding in the knee joints and how it can be treated.

For some people who suffer from hemarthrosis of the knee, mobility becomes a big issue, so performing everyday tasks can be very difficult.

Hemarthrosis and its causes

Hemarthrosis causes can be anything from trauma to the joint to neurological problems or even bleeding disorders. People who already suffer from a bleeding or blood clot disorder have a higher risk of experiencing hemarthrosis.

Here’s a look at some of the reasons people suffer from joint bleeding:

Injury/trauma: A serious sprain or trauma to the extremities that impacts the major joints can lead to bleeding within that specific joint area.

Infection: Some infections can lead to articular bleeding

Haemophilia: Those who suffer from this hereditary condition, which impairs blood-clotting mechanisms, are more likely to get hemarthrosis.

Medications: Anticoagulants such as warfarin have the potential to lead to joint bleeds.

Clutton joint: This is inflammation of the joints in those who have been diagnosed with congenital syphilis.

Hemorrhagic Syndrome: There are people whose mucous membranes have a tendency to bleed and they are usually suffering from some type of hemorrhagic syndrome.

Knee joint arthroplasty: This is another way of saying a knee replacement.

Crimean-Congo hemorrhagic fever: This is a virus that is usually spread by tick bites or through contact with livestock that is carrying the disease.

Neurologic deficits: There are cases of neurological deficits that have been linked to hemarthrosis.

Osteoarthritis: Although rare, spontaneous hemarthrosis has been seen in elderly people who suffer from osteoarthritis.

Cancer: Some people who suffer from neoplastic growths, which are tumors in the bone, have experienced hemarthrosis.

Vascular damage: This is related to a defect in the wall of an artery.

Fracture: Sometimes a fracture can lead to bleeding in the joint area.

Meniscus tear: The meniscus is a rubbery disc that cushions the knee. If it tears, there is the possibility of
hemarthrosis in the joint.

Arthroscopic surgery: This is a procedure that surgeons use to diagnose and treat joint problems.

Hemarthrosis knee problems can be unbearable. If you experience any of the symptoms outlined here, you should seek medical attention sooner rather than later. Your doctor will take a full medical history, including information about any family members who might have bleeding disorders. You will also be asked about any recent injuries you might have experienced. It is important to tell the doctor about medications you are currently talking to.

A physical exam that focuses on the area where you are experiencing discomfort will be carried out. This may include bending and moving so the doctor can see how the joint functions. It is important to speak up if and when something hurts.

There is a procedure called synovial fluid analysis that can be helpful in diagnosing joint inflammation. As you may have guessed, it involves inserting a small needle into the joint to draw fluid. If the fluid includes a reddish-colored hue, there just might be blood present, but the sample is sent to a lab for proper testing. Imaging tests are often recommended as well. These tests include an x-ray and MRI.

If the doctor suspects you have a bleeding disorder, they will likely order a blood test. The sample will be tested to measure its clotting factor.

Hemarthrosis knee treatment depends on the specific cause, but in any case, if you have a severely swollen, inflamed, or painful knee, you should seek medical attention as soon as possible. If it ends up being a blood disorder, it will usually be treated with an injection of the missing clotting factor to help stop the bleeding. The patient can also be given a drug that can help encourage the body to make clotting factors. Below are some other hemarthrosis treatment possibilities, again depending on the cause:

Some of the hemarthrosis treatments listed here can sound frightening, particularly the surgical approaches. However, thanks to modern advances in medicine, many people are able to undergo noninvasive operations. These are surgeries that require less recovery and mean that the patient does not sustain large, noticeable scars. If a specialist such as an orthopedic surgeon recommends an operation, remember that your treatment isn’t necessarily complete after that procedure. You just might need some physical therapy or electrical stimulation of the muscles around the joints to help you fully recover and get back to your normal activities.

Hemarthrosis can be a serious health issue. A series of small bleeds or even one severe bleed can cause a lot of damage. There are several complications linked to hemarthrosis. Loss of strength in the muscles around the joint is a common complication. Pain when using the joint or when the joint is at rest can also be an issue. Being unable to participate in daily activities, such as walking, carrying heavy loads, and walking up and down stairs can be very frustrating. Those who suffer from knee hemarthrosis can also encounter degenerative arthritis. This is because the cartilage can get destroyed.

If hemarthrosis or articular bleeding is caught quickly and is managed by treating the underlying cause, in many cases, people go on to live pain-free, productive lives. Those who suffer from chronic clotting disorders such as hemophilia often find that physical therapy makes a huge difference in their lives.

Related: Easy way to find out if your joints are at risk of disease

8 causes of your joint pain