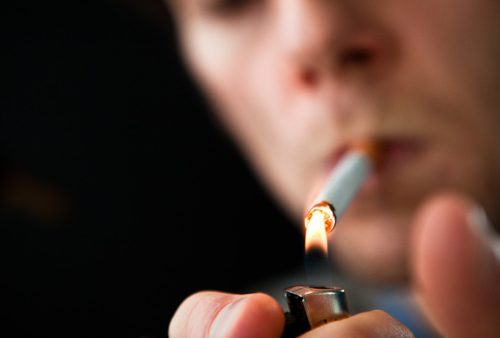 Ex-smokers, on the other hand, demonstrate a reduced risk of hearing loss. This trend may be explained by the fact that smoking cessation often comes along with introduction of healthier lifestyle habits.

The study looked at 164,770 U.K. adults who completed hearing tests. Research lead Dr. Piers Dawes said, “Given around 20 percent of the U.K. population smoke and up to 60 percent in some countries, smoking may represent a significant cause of hearing loss worldwide. We found the more packets you smoke per week and the longer you smoke, the greater the risk you will damage your hearing.”

“We are not sure if toxins in tobacco smoke affect hearing directly, or whether smoking-related cardiovascular disease causes microvascular changes that impact on hearing, or both,” Dr. Dawes added.

Dr. Ralph Holme, Head of Biomedical Research at Action on Hearing Loss, said, “Hearing loss affects 10 million people in the U.K. and with an aging population is set to become a major public health issue. Hearing loss is often viewed as an inevitable consequence of aging, but as the research published today shows, this may not always be the case. Giving up smoking and protecting your ears from loud noise are two practical steps people can take today to prevent hearing loss later in life.”

In an alternative study, researchers found that adolescents exposed to smoke had double the risk of hearing loss, compared to adolescents who were not exposed. Research lead Anil Lalwani said, “More than half of all children in the U.S. are exposed to secondhand smoke, so our finding that it can lead to hearing loss in teenagers has huge public health implications. We need to evaluate how we deal with smoking in public places and at home, as well as how often and when we screen children for hearing loss.”

The dangers of secondhand smoking are well known by now. Sharing living quarters with smokers increases one’s risk of heart disease and lung cancer mortality. Children who are exposed to smoke are more likely to develop severe asthma and middle-ear infections.

The study found that teens exposed to secondhand smoke were more likely to suffer from sensorineural hearing loss, which is mainly associated with cochlear damage. Coauthor Michael Weitzman explained, “It’s the type of hearing loss that usually tends to occur as one gets older, or among children born with congenital deafness.”

Roughly 80 percent of the teenagers in the study were not aware of the problem – which is quite common, as mild hearing loss often goes unnoticed.

The study adds evidence to the harmful effects of secondhand smoking and stresses the importance of protecting children from the smoke.

Why men are more prone to hearing loss