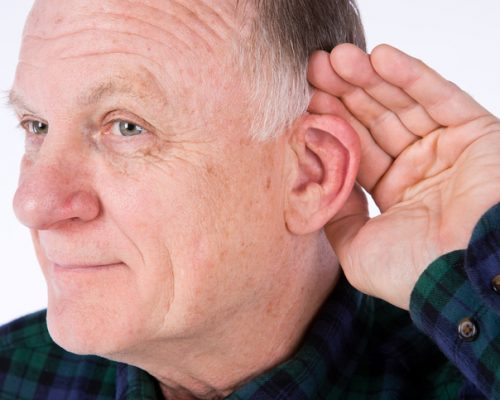 The researchers used information from an ongoing longitudinal study to compare aging brain changes over time in normal hearing adults and those with hearing loss.

Previous research has found a link between hearing loss and changes in the brain, noting smaller size of brain structures responsible for sound processing in those with impaired hearing.

In the longitudinal study, 126 participants underwent annual MRI scans and were tracked for 10 years. Based on the hearing test results, 75 of the participants had normal hearing and 51 had impaired hearing.

Based on MRI scan analysis, those who had hearing loss at the beginning of the study had accelerated rates of brain atrophy, compared to those with normal hearing. Those with hearing loss on average lost an additional cubic centimeter of brain tissue annually and also had significant brain shrinkage in various parts of the brain.

The study stresses the urgency of hearing loss treatment instead of ignoring it and accepting it as a normal part of aging.

Lead researcher Frank Lin said, “If you want to address hearing loss well, you want to do it sooner rather than later. If hearing loss is potentially contributing to these differences we’re seeing on MRI, you want to treat it before these brain structural changes take place.”


Hearing loss and its effect on the brain

The impact of hearing loss on the brain is an established fact. Numerous studies have concluded that hearing loss can negatively affect memory and thinking abilities. A study published in JAMA Internal Medicine found that there is a higher risk of dementia among seniors with hearing loss.

The study followed 1,984 seniors over the course of six years. The participants did not have any serious memory or thinking problems at the start of the study. All subjects underwent hearing exams along with regular memory and thinking tests.

Compared to seniors with normal hearing, those with hearing loss were 24 percent more likely to have memory or thinking deficits. The more severe the hearing loss, the worse impact it had on memory and thinking abilities.

Why or how exactly hearing loss contributes to brain problems remains unclear. One theory suggests that those with hearing loss are less likely to go out and be social, and there is much evidence to show that isolation and loneliness are associated with a higher risk of Alzheimer’s disease.

On the other hand, the study found that those who wore hearing aids or other corrective hearing devices had slower rates of cognitive decline, but unfortunately, many seniors do not wear these devices. Most insurance companies do not pay for hearing aids, and many seniors simply cannot afford them.

Additional research is required to determine whether hearing loss correction is an effective method in preventing cognitive loss.