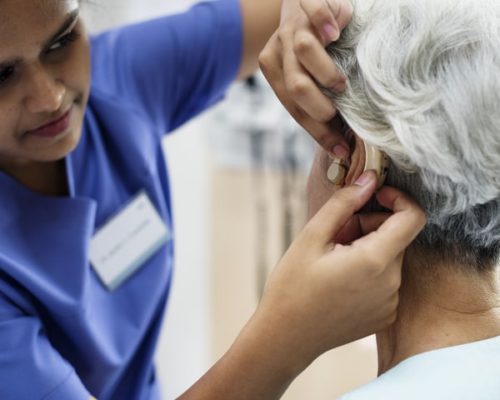 Hearing loss is irreversible but can be improved with the use of hearing aids. Hearing is important for health not only because it allows us the ability to hear sounds, conversations, and warnings, but because it plays a large role in our cognitive health.

It has been extensively studied that among those with hearing loss, they experience higher risks of dementia and Alzheimer’s disease. It is believed that a lack of social interaction is what increases the risk, as risk of memory loss is less among those who can hear, as they can remain socially active.

The latest research findings looked at the benefits of hearing aids on cognitive health. Researchers followed 2,040 individuals between 1996 and 2014. The participants completed word memory tests at various stages and rate of memory decline was measured prior to and post-hearing aid.

Hearing aids did not reverse or stop memory decline, but it did slow down progression by three-quarters. In an alternative group of 2,068 who underwent cataract surgery, memory decline slowed down by half.

The researchers suggest there is a strong link between hearing, vision changes, and cognitive health, so older adults exhibiting mental decline should be screened for vision and hearing changes.

Dr Piers Dawes explained, “These studies underline just how important it is to overcome the barriers which deny people from accessing hearing and visual aids. It’s not really certain why hearing and visual problems have an impact on cognitive decline, but I’d guess that isolation, stigma and the resultant lack of physical activity that are linked to hearing and vision problems might have something to do with it.”

“And there are barriers to overcome – people might not want to wear hearing aids because of stigma attached to wearing them, or they feel the amplification is not good enough or they’re not comfortable,” he added.

Although many people suffer from hearing loss, not so many actually get it treated for a variety of reasons including cost and stigma.

Living with hearing loss can be detrimental to your overall health, so it is important you correct it.
Also Read: