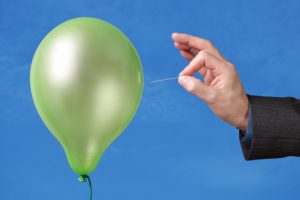 Hearing experts from the University of Alberta have found that the effect of popping a balloon is similar to that of shooting a high-powered shotgun and could lead to hearing loss. The study, published in Canadian Audiologist, detailed how different methods of popping balloons could create different effects on an individual’s hearing, with the aim of raising awareness of how detrimental repeated exposure to loud sounds may be.

Hearing expert Bill Hodgetts of the University of Alberta explained, “Hearing loss is insidious – every loud noise that occurs has a potential for lifelong impact. We want people to be mindful of hearing damage over a lifetime, because once you get to the back end of life, no hearing aid is as good as the once healthy built-in system in your inner ear.”

Hodgetts and his colleague Dylan Scott set out to discover how loud popping a balloon could be and what damage the activity may cause.

Using ear protection, a high-pressure microphone, and a preamplifier, the team measured the resulting noise of popping a balloon in three different ways. Balloons were popped with a pin, blown up until they burst, and crushed until they exploded, with the loudest noise caused by blowing them up.
The noise that resulted was nearly 168 decibels loud, which is four decibels louder than firing a 12-gauge shotgun and 28 decibels louder than anyone should be exposed to, according to the Canadian Centre for Occupational Health and Safety. Hearing loss occurs when noise damages and erodes the delicate hair cells of the inner ear. These cells do not regrow, and over time, repeated exposure to loud noises can gradually wear down these hair cells and result in hearing loss.

Balloons are a staple at children’s birthday parties, and it is inevitable that at least one or two will be popped by the end of the event. The exposure to such loud sounds so early can begin the culmination of hair cell damage that may lead to hearing loss. Hodgetts and Scott hope that their findings will help change the way people think about hearing loss and encourage people to take precautionary measures for themselves and their children.

Your risk of hearing loss goes up because of this