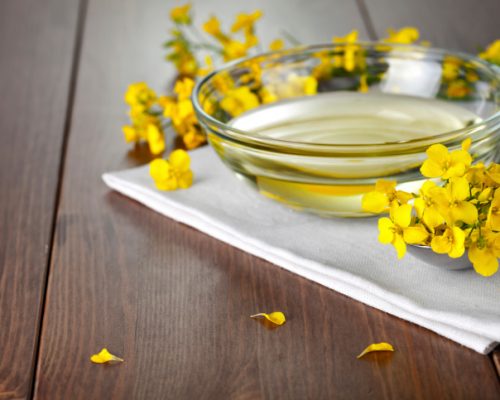 Cooking. Whether we love it or not, it’s something everyone has to do sooner or later. Microwave meals just aren’t the answer to good eating or good health! And whether you are a chef or just getting by when it comes to food preparation, frying something up in a pan is done by almost everybody.

There are all kinds of cooking oils out there from vegetable oil, to coconut oil, to olive oil to palm oil. But the one we want to bring to your attention is canola oil – and how and why canola oil can be a bad choice when you are looking to fry up that next dish.

Canola oil is developed through the hybridization of rapeseed. (Sadly, that’s not a typo. This is a Latin term for turnip rutabaga, cabbage, Brussels sprouts and mustard.) Canola gets its name from “oil from Canada” which sounds much better than the alternative. It was developed through natural breeding at the University of Manitoba, in Canada, during the 1970s.

Canola oil goes through a refining process that requires heat and a number of chemicals to purify the color and to remove some unappealing odors from the oil. Despite some of these unpleasant-sounding steps to refine canola oil, the oil and subsequently canola oil frying has spread around the world. Now the oil is produced in various countries everywhere from the European Union to Kazakhstan.

While it’s been commonly accepted as OK for consumption, there are questions surrounding the health value of this oil when comes to cooking with it. 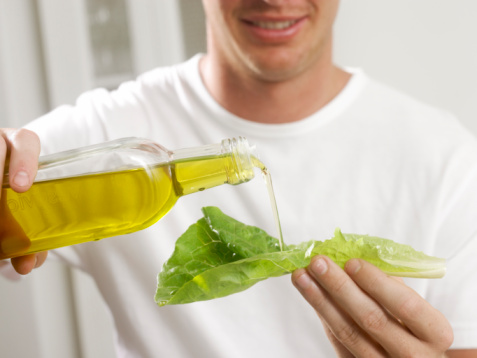 The short answer is canola oil is not particularly good for you. The trouble with canola oil is that it’s delicate oil. That mean it’s a type of oil that does not have a long shelf life. Keeping it and cooking with it over a long period of time could mean that you are cooking with an oil that is actually decomposing – not the most appetizing thing to think about when you are preparing your favorite fish in a pan.

This decomposition is usually caused by oxidization. It’s the same process that will turn a nice red apple brown and breaks down many organic substances. So the trouble is if you cook with something that is going through an oxidization process, you are exposing your body and organs to higher levels of oxidization than they would otherwise experience. This exposure could lead to inflammation, and excess exposure could also possibly increase the rate of degenerative diseases.

So maybe by now you are second guessing your choice in cooking oils and would like to branch out and try a canola oil substitute. What options are available that are good to cook with and also good for you?

Different oils you can try to replace canola oil 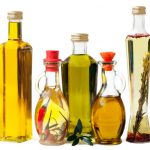 The good news is there are all kinds of oils out there that can be used in food preparation which are not only good for you, but also will stand up well to the heat of your kitchen.

One of the most widely used and famous oils is olive oil. It is the main source of dietary fat in the Mediterranean diet, which is associated with a low death rate from cardiovascular diseases in the Mediterranean compared to other parts of the world. A study published in the journal Pharmacological Research found that people who regularly consume olive oil are less likely to develop cardiovascular diseases, including high blood pressure, stroke, and high blood cholesterol and triglyceride levels.

In another study conducted by researchers at the Autonomous University of Madrid in Spain concluded that in a Mediterranean country where olive and sunflower oils are the most commonly used fats for frying, and where large amounts of fried foods are consumed both at and away from home, no association was observed between fried food consumption and the risk of coronary heart disease or death. Interesting!

Another oil that is gaining popularity is coconut oil. Coconut oil is used extensively in tropical countries, especially India, Sri Lanka, Thailand and Philippines, which have a good production of coconut oil.

Coconut oil is also useful for weight loss. It contains short and medium-chain fatty acids that help take off the weight. It is also easy to digest and it helps in healthy functioning of the thyroid and endocrine system. It increases the body’s metabolic rate by removing stress on the pancreas to burn more energy, helping obese and overweight people lose the weight.

Palm oil is obtained from the fruit of the palm tree that can be used as a food through frying.

In addition to cooking, palm oil is used for preventing vitamin A deficiency, cancer, brain disease, aging, and treating malaria, high blood pressure, high cholesterol and cyanide poisoning. Palm oil is used for weight loss and increasing the body’s metabolism. So it’s a solid choice, too.

Red palm oil in particular is getting quite a bit of attention of late. This is different from the palm kernel oil, but can also be consumed as a healthy food. Benefits are achieved through the red color of the palm fruit oil and include beta-carotene and lycopene. These powerhouse antioxidant nutrients are the same ones that give tomatoes and carrots and other fruits and vegetables their rich red and orange colors. The great thing is that red palm fruit oil contains more than tomatoes or carrots. Red palm fruit oil is also densely packed with a powerful form of vitamin E.

While canola oil is widely available and easily accessible to most people, there are number of substitutes that can be incorporated into your diet when preparing food. Taking time to search out other types of oil like olive oil or palm oils, or the more exotic coconut oil and red palm oils, can help give you any number of health boosts.

The thing to be aware of if you do choose to use canola oil is that it does tend to have a limited shelf life. While the smell test is your friend when it comes to checking the condition of canola oil, don’t take any chances as it is prone to oxidization and breaks down quickly.

Switching to other oils may be your best bet for safety when you are preparing your meals, as well as an opportunity to get more healthy benefits from your cooking by trying out different oils as part of your daily diet. Cook well and eat well!

Major cholesterol benefits discovered in this controversial oil
If your doctor has raised concerns about your cholesterol, they probably also recommended foods to enjoy and foods to stay away from. Oil, in particular, is often talked about with regard to people with high cholesterol. What oil should you eat?

You’re on a beach and the view is only the white sand and clear, blue water spilling out in front of you. A friendly face approaches, asking if you would like a coconut. Without hesitation, you accept the offer and enjoy the coconut’s fresh water, along with your relaxing vacation. Read more here.