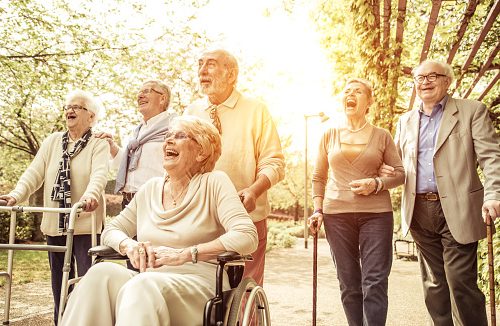 A study conducted by the independent research organization NORC at the University of Chicago suggests that as we grow older, our happiness grows too. The pessimism of the younger generation takes an optimistic turn later in life according to the results of the study. Despite the fact that being of old age brings with it a slew of additional concerns such as declining health, lack of independence, and memory loss, the majority of older Americans are happier than their younger counterparts.

It could just be the fact that younger generations are inexperienced and have a level of uncertainty and hesitance when making future decisions that may affect their lives, bringing undue amounts of stress that leads to pessimism. “The younger generation is less optimistic,” says Dr. Zia Agaha, chief medical officer at West Health, a nonprofit focused on aging issues that helped produce and release this survey with NORC. “Perhaps as they age they will build resilience and they build the capacity that will help them cope better”.

The consensus of the study is that optimism about growing older increases with age. Forty-six percent of individuals in their 40s were described as being somewhat optimistic about aging, compared to 66 percent of individuals 70 or older. An interesting point to note is that regardless of decade, correspondents showed an increase in feelings of confidence as opposed to helplessness about aging and in assessing their household finances. Ratings of quality of life showed similar trends with people showing an improvement as they moved from their 50s to 60s and beyond, with about 66 percent of respondents 70 years or older rating life as excellent or very good. Only about half of respondents in their 30s feel the same way.
Previous studies on this subject appear to show pessimism growing as people move out of their 30s and into middle age, and eventually falling later in life. Of the older population surveyed, those 70 or older were least likely to express worry about age bringing poor health, moving into an assisted living facility, or even memory loss. Seniors were also least likely to express fear that their age would prompt disrespect by others, be a burden on their families, or the loss of their independence.

While happiness is often a subjective term, everyone can agree that having social and financial security is an important aspect of it. The older population is more likely to have made long-standing relationships, have had children and possibly grandchildren, and a bigger family for them to spend their life with. Seniors are more likely to have worked for a longer period of time, securing pensions and savings over the decades, providing a level of financial security that people in their 30s don’t have.

The poll was based on online and telephone interviews of 3,026 adults aged 30 and older who were members of NORC’s national representative AmeriSpeak panel. It may have assessed just a small slice of the population of Americans, but it demonstrates the differences of priority and overall happiness that the various generations have.

Related: Fatigue (tiredness) in elderly: Causes and how to treat it