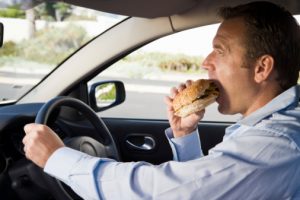 Though seemingly harmless enough, such fast food branding may be affecting your ability to experience happiness, according to new research.

In the study, recently published in the Social Psychological and Personality Science journal, the University of Toronto looked at how people relate to iconic fast food logos, which have been traditionally associated with efficiency, leisure – and therefore greater happiness. Instead, it found that this imagery symbolizes society’s preoccupation with being in a rush, and actually may impede the ability to just enjoy life.

Researchers conducted three experiments based on their own theory that fast food creates a feeling of impatience, affecting how people savor pleasant experiences.

In the first test, 285 participants completed a survey on their own ability to appreciate more positive occurrences. Their answers were then measured against the concentration of fast food restaurants in their neighborhood. The second test involved 257 participants’ reactions to a single image of “natural beauty” after being shown fast food visuals. The last test measured 122 participants’ responses to a “harmonious melody,” after having been primed with a fast food symbol. In all three experiments, participants showed a marked decrease in their capacity to savor, which affected their ability to appreciate more pleasant experiences.

In other words, because of the ubiquitous nature of fast food symbols, merely eye-balling billboards and signage puts us in an impatient frame of mind, and helps to explain our high irritation levels. And this impatience “hampers people’s ability to fully experience and enjoy pleasurable moments in life –  ‘smelling the roses,’ so to speak,” lead researcher Sanford DeVoe concluded in the report.

Of course, that isn’t the only thing to worry about when it comes to fast food. The accepted wisdom is that if you reside in a city that has more places to purchase Big Macs and Double Down sandwiches, you have a much higher risk of being obese. In fact, in a 2007 study by the University of Alberta, researchers found that for each additional fast food restaurant for every 10,000 people, a city’s obesity rate increases by at least 3 percent. This strong relationship, according to the school’s researchers, suggests that access to fast food may indeed be one of the issues explaining rising obesity rates.

Still, University of Toronto researchers acknowledged the limits of their own findings and stressed the need for further research. In the near future, they hope to conduct further experiments on fast food logos and the impact that these “symbols of time efficiency” have on our overall happiness.

There’s a reason we smile and pat our stomachs in satisfaction after a good home-cooked meal!