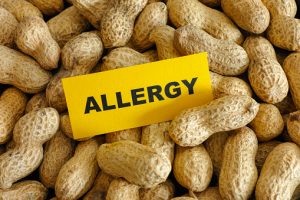 Allergies are usually minor nuisances that make us feel uncomfortable. However, food allergies can pose a bigger problem and even be life-threatening. New research may have found a genetic clue associated with the most common serious food-related allergic reaction, the peanut allergy.

An allergy is basically when your immune system reacts to a foreign substance, such as pollen or pet dander, that typically doesn’t cause a reaction in most people. When this substance is recognized, your body begins to produce antibodies against them, labeling that allergen as harmful.

While most allergies result in sneezing, itching, and a runny nose, more severe reactions can cause swelling of the mouth, tongue, or even throat, and is termed anaphylaxis. When this occurs, breathing can be extremely difficult, often cutting off respiration and death if not treated. The current method for treating an acute anaphylactic reaction is emergency epinephrine, which can reduce symptoms until emergency treatment can be started.

A research team from Canada has identified the role of a gene called c11orf30/EMSY (EMSY). While this gene has already been associated with allergy-related conditions such as asthma and allergic rhinitis, this is the first study to suggest the gene plays a role in general allergic predisposition, determining who is more likely to develop an allergy.

“Food allergy is the result of both genetic and environmental factors, but there are surprisingly few data regarding the genetic basis of this condition. The discovery of this genetic link gives us a fuller picture of the causes of food allergies, and this could eventually help doctors identify children at risk,” says Dr. Daley, an Associate Professor at The University of British Columbia, Centre for Heart Lung Innovation at St. Paul’s Hospital, Vancouver, BC.


Looking at the DNA of allergy sufferers

The study in question analyzed DNA from 850 people with peanut allergies and nearly 1,000 without. Over 7.5 million genetic markers across the DNA were scoured for clues as to which genes might contribute to an increased risk of developing food allergies.

By analyzing genetic studies form American, Australian, German, and Dutch sources, the research team found that EMSY was associated with an increased risk of both peanut allergies and food allergies.

“One of the hurdles in developing new treatments for food allergies is identifying the specific genes and pathways we need to target. These results suggest that EMSY could be a useful target for predicting and managing food allergy treatments in the future,” said Dr. Aida Eslami, a postdoctoral fellow at The University of British Columbia, who was an author on the paper.