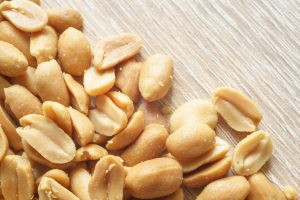 The earlier a child is treated for peanut allergies the better the outcome, according to research findings. The study found that treatment can be started as early as nine months old, before the body’s “allergic program” fully matures.

The treatment is called oral immunotherapy (exposure therapy), which involves exposing children to peanuts despite the diagnosed allergy. The doctor administers a small amount of peanuts to the child to lessen the body’s allergic response.

Lead study author Dr. Wesley Burks said, “If you are peanut-allergic, treatment early in life can have a longer benefit after stopping the treatment.”
The study looked at 37 children aged nine to 36 months, who were given either high or low dosages of peanuts daily for 29 months. After the treatment was completed, the children were not exposed to peanuts for 30 days. Nearly 80 percent of the children were able to consume peanut-containing foods without an allergic reaction.

The 37 children were also compared to 154 other children allergic to peanuts. Those who underwent exposure therapy were more likely to consume peanuts without a problem.

Early treatment for peanut allergy also helps reduce gastrointestinal symptoms. While older children may experience stomach problems during exposure therapy, causing them to opt out, no such side effects were reported in younger children.

While exposure therapy can be useful to help minimize peanut allergies, it should always be carried out under medical supervision of a doctor.