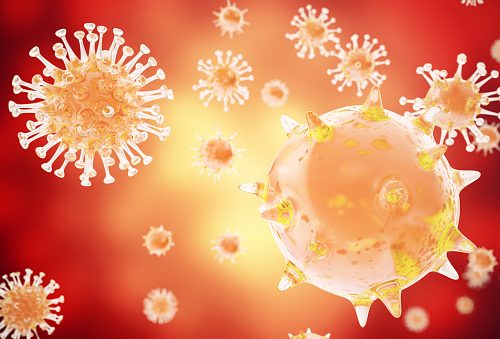 Although it may not be peak flu season, research into the influenza virus is always moving. The flu virus infects tens of thousands of Americans every year and can cause mild to severe illness, with more serious outcomes leading to hospitalization and even death. The ones most at risk for the more detrimental complications are young children, the elderly, and those who have certain health conditions that weaken their immune system. It is therefore recommended that these individuals get the flu vaccine every year to protect themselves. The initial stages of the flu can present with little to no symptoms at all, often leading to an increased spread of the virus before calling in sick. This has led scientists and researchers to pursue better ways for identification, with new developments available to make influenza visible to the naked eye.

Researchers at the University of Notre Dame have engineered dye molecules to target a specific enzyme of the virus, and by shining a lamp or blue laser pointer, they will become fluorescently illuminated. While still in the prototype phase, the researchers believe that when fully optimized, this method could be used as part of a diagnostic procedure in a clinical setting or even at home. The test would be rapid and allow for easy detection of the virus.

When first developing the new technique, scientists used samples that mimicked that of an infected patient and spiked the samples with an enzyme called neuraminidase, which had been derived from the flu virus. During testing, they found that the samples emitted red as a positive sign for the influenza virus or emitted blue if the sample was negative for the virus. The process also allowed the ability to show which antiviral drugs would be a better treatment for individual patients.

Neuraminidase is an enzyme found on the surface of the influenza virus. Designing a dye that reacts with this enzyme and subsequently emits a light once stimulated can revolutionize the diagnosis of this often initially covert illness. Diagnosing the influenza illnesses sooner can help better treat it and save many lives.

“Viral cultures are the gold standard for diagnosis of influenza but take several days to develop. By targeting an enzyme inherent to the virus and identifying its presence in a sample, we can make a rapid determination of the influenza in a patient for an efficient and immediate diagnostic that would improve patient treatment and reduce overuse of antivirals,” said Bradley Smith, co-author of the study.

Norovirus vs. flu (influenza), differences in symptoms, transmission, and prevention