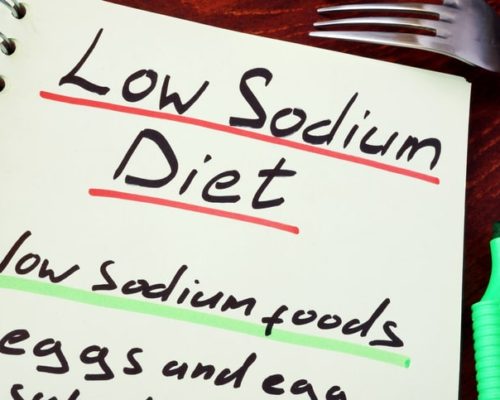 The average person consumes about 20 times more salt than the body needs, putting themselves at risk of health complications. However, there are a lot of foods that are low sodium – you can try a low sodium diet to maintain good health.

Table salt is the main source of sodium. Our bodies only need ¼ teaspoon of salt each day, but since sodium is added to so many foods during preparation and processing, many people are getting more than they should.

Sodium is a substance that can be difficult to monitor by taste alone. Some foods taste as if they do not contain salt, but in fact, are high in sodium. Canned foods, processed foods, convenience foods, and fast foods can all include sodium.

We need sodium to help control fluid balance in our bodies and maintain both blood volume and pressure. When we eat too much sodium, it can lead to fluid retention and high blood pressure. For people who have cardiovascular diseases, the recommended limit for sodium is about two-thirds of a teaspoon per day.

There is a tendency to assume that a low sodium diet is best for everyone. In reality, not all of us need to be on a diet that includes only foods low in sodium. To put it in perspective, a low sodium diet means less than 1,500 milligrams of sodium per day. As long as you don’t go over 2,300 milligrams, you should be okay.

If you have been diagnosed with high blood pressure, you should consider lowering your sodium intake. Decreasing salt intake can help reduce your pressure numbers and take stress off of your heart. Research tells us that African Americans, as well as those who suffer from diabetes, are at a higher risk of getting high blood pressure, so they may benefit from adopting a low sodium diet menu.

Too much salt can cause fluid retention, which can be hard on people with kidney disease. If you have kidney issues, low sodium foods are recommended.

There are many benefits of a low sodium diet. Reducing sodium or salt helps lower blood pressure, and prevents swelling of extremities. It also lowers your risk of heart disease. Some medications will work more efficiently if you are on a low sodium diet.

Research indicates that there is a decreased risk of death due to stroke and a reduced risk of kidney stones, as well as osteoporosis, when you consume low sodium foods. Sodium intake can affect diuretics, so if you are taking them, you should talk to your doctor about your diet. They may have specific instructions about both fluid intake and sodium consumption.

Foods That Are Low in Sodium

Identifying what foods are low in sodium can be challenging. The following low sodium foods list provides a good sampling of what to include in a healthy diet.

Tips to Consider for a Low Sodium Diet

If you are seriously thinking about a low sodium diet, here are some tips to take into consideration:

The following is a sample meal plan for a two-day period. It will give you a better sense of what a typical low sodium diet looks like.

While a low sodium diet may initially sound rather restrictive, you can spice up meals with pepper, jalapeno extract, hot sauces, onions, lemon, or lime juice. You can also add flavorful herbs and spices, including turmeric, thyme, garlic, rosemary, and cayenne. With a little bit of creativity, you will discover that meals really can be delicious without a lot of sodium.