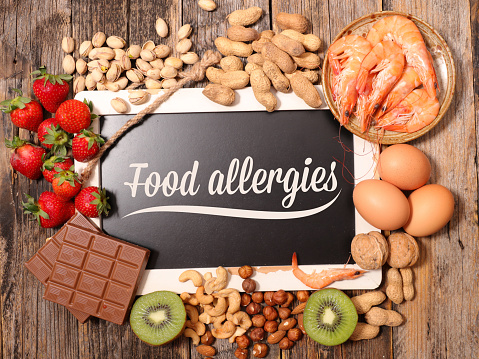 Food is a necessity of life. We crave it, seek it out, and devour it when we’re hungry. This primal desire is an evolutionary trait that serves to provide us with the energy we need to survive. However, some people will literally die when they come into contact with a particular item of food. We call this an allergic reaction, and it affects millions of Americans.

Allergic reactions can present in many different forms and occur due to many different things. Often, the first thing that comes to mind are pollen allergies, which lead to runny noses and sneezing. This is the result of your immune system mistakenly identifying a normally harmless substance as dangerous. The overreaction leads to a cascading immune cell reaction, resulting in the production of specific antibodies and histamine in the presence of that particular allergen. This leads to common allergy-attributed symptoms like sneezing, hives, watery eyes, and itchiness.

All food allergies behave in much the same way and present very similarly. Approximately four percent of Americans currently live with a food allergy, with women and Asians being the most affected.

“Recent reports suggest that food allergies are on the rise, with more food allergy-related hospitalizations in the U.S. over the last decade,” said lead researcher Dr. Li Zhou.

The most troubling complication of an allergic reaction is anaphylaxis. This is a severe reaction to an allergen causing life-threatening signs and symptoms that require emergency treatment. Anaphylactic symptoms include:

The researchers reviewed nearly three million medical records and identified more than 97,000 patients who had suffered from one or more food allergies or an intolerance to food. They found that approximately one in six had a documented anaphylaxis episode, with common allergens being shellfish such as shrimp and lobster. Other allergens included dairy, peanuts, and fruits or vegetables.

More concerning was the fact that the data showed these allergic patients infrequently received follow-up testing, with a lack of allergists available being blamed.

What most allergy suffers are not aware of is that they can be treated by gradually exposing themselves to increasing amounts of the allergy-causing food or allergen. This way, a tolerance will begin to develop. But this is not recommended in those with a severe allergy. Avoidance and anti-allergy medication is their only option.