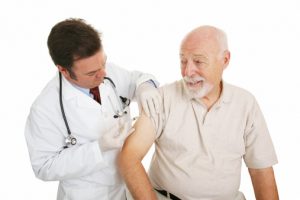 The findings can help better predict which groups of people will be at highest risk for the flu and who will respond best to the vaccine. Marasco said, “This will change our understanding of how to achieve universal vaccine responsiveness in a population.”

The study focused on variations of IGHV1-69, which is one of 50 genes that carry information about antibodies to fight off illness. Antibodies from IGHV1-69 can potentially help improve flu vaccines and create a more universal vaccination. Influenza changes every year. The job of the vaccine is to spot the “head” of the virus and target it in order to prevent the flu. But the stem does not change. Targeting the stem may help create longer-lasting vaccines against different influenza strains.

About 15 to 20 percent of the population do not carry the proper variation of IGHV1-69, meaning they cannot effectively be protected against the flu, even with the vaccine. In these individuals, other gene variations are used to make flu antibodies, but researchers have yet to identify them.

The researchers analyzed blood samples of individuals who received the 2007 flu shot, and found that protection against the flu varied based on which variant of IGHV1-69 the individual had, as well as how many copies they had.

The researchers believe that exploring all the variations of IGHV1-69 can help improve the flu shot for the masses.


How the flu virus affects the immune system

When anything foreign enters the body – virus, bacteria – the immune system targets it in order to destroy, eliminate, or fight it off. One way it does this is by creating antibodies, which then circulate the bloodstream until coming into contact with antigens. When antibodies come into contact with antigens, they will either classify them as harmless or harmful on their own, or trigger an immune response that sends more antibodies.

Sometimes though, a virus will overpower antibodies, leading to illness. In the case of influenza, it can spread invading the immune system by changing its antigens, so that the antibodies cannot recognize them and thus do not trigger an immune response.

Often influenza antigens change in presence of more than one virus. The original antigens completely change and become unrecognizable to the known antibodies. When this occurs, it is what causes the flu to become symptomatic.

When we are administered the flu shot, the new strain of the flu for the year is injected into the body, so that the immune system can create antibodies. But if present is the strain that is different from the one you have been vaccinated with, you will still get sick.

Even though the flu shot is not always 100 percent accurate in regard to which flu strain will be most prevalent, it is still your best defense against common strains.

Flu in pregnancy can increase risk of bipolar disorder in child

Women are better protected against the flu than men

Latest findings suggest that women have better protection and are better defended against the flu, compared to men. Estrogen is found to help ward off the flu virus, which may explain why men experience the flu worse than women. Furthermore, the findings may help create more effective flu treatments for both men and women. Continue reading…