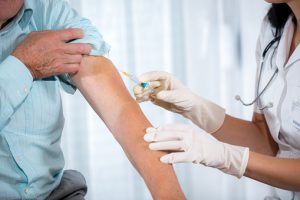 Although cases of the flu tend to surge in the winter months, the Centers for Disease Control and Prevention (CDC) have reported that this year cases of the flu still remain quite low in the U.S. The reasoning for minimal flu cases is due to the abnormally warmer temperatures which much of the U.S. has been experiencing this winter. What is important to note, though, is that with a sudden drop in temperatures cases of the flu are expected to increase – especially among those who have yet to receive the flu shot.

Epidemiologist from the CDC, Lynnette Brammer, said, “Flu is relatively low, but it’s starting to increase and there is still time to get vaccinated.”

Although this year’s trend may seem unusual, there have been other documented years where flu cases began slow but then skyrocketed suddenly due to lower temperatures. Brammer added, “The last three years’ flu season was earlier than normal, so this one feels late. But this is really not unusual for flu season.”

In previous flu seasons, spikes in flu cases were not seen until February or even March. Brammer states that although flu activity is quite high in North Carolina and Maryland, other states have yet to see an influx in flu cases. Brammer does suggest that you can still better protect yourself form a flu epidemic by getting the vaccine early on and so it’s still not too late to get the flu shot.

The flu can be dangerous and even deadly for many population groups, and although it is not 100 percent effective it can still offer between 40 to 60 percent protection against the predicted flu of the season. Last year the flu shot offered minimal protection due to the predicted flu strain which researchers believed was going to affect people did not and instead another strain – H3N2 – was more predominant which was not included in the vaccine. This year the flu shot does contain the strain H3N2.