Home » Heart Health » Is your favorite sport bad for your heart? 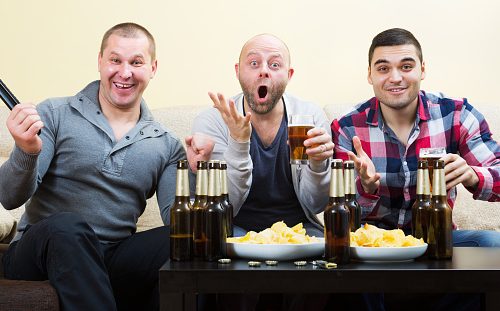 If you’re the type to sit in front of your TV and cheer on your favorite sports team, you may be putting your heart at risk. The latest Canadian study examined how watching hockey affects fans hearts. It found that whether your team wins or loses, the emotions and thrills do play a role in heart health.

The researchers found that watching sports, either on TV or live, stimulates the heart similar to that of vigorous exercise.

Study lead author and cardiologist Dr. Paul Khairy explained, “We all know that sports fans can experience quite a bit of emotional stress but surprisingly little is known about the impact of emotional and physical stress on the heart. We’ve quantified this intense, emotional stress response that has the potential to trigger cardiovascular events on a population level.”

The researcher was inspired by his younger daughter who wanted to look at the effects of sports on the heart for a school project.

In preliminary findings, the researchers found the same relationship exists between heart health and soccer fans. The previous study looked at soccer fans during the World Cup where there was an increase of strokes and heart attacks by 25 to 50 percent during that time.

For Dr. Khairy’s study, they looked at Montreal Canadiens fans who filled out questionnaires about health and their love of hockey. The participants then wore devices that tracked their heart rates while watching a Habs game live.
The researchers also recorded the game so they could replay what was going on when changes of heart rate occurred.


The research found that heart rates of the fans increased 75 percent during high-stake positions such as overtime or during scoring opportunities.

If the game was watched live, then heart rates increased 110 percent, which is similar to partaking in sprinting.

Although for the average fan with no history or current diagnosis of heart disease or other heart-related problems, these spikes in heart rhythm aren’t alarming. On the other hand, for a person who already has risk factors for a heart attack or stroke, these can be pivotal moments that could increase a person’s risk of a cardiovascular-related event.

Dr. Khairy added, “If someone is watching the game and has cardiac symptoms, they shouldn’t be ignored, they should be addressed. Don’t wait until the end of the period to do something about it. Further research needs to be done to know if it does translate into cardiac events.”

Related: How your heart health affects your emotions

Improve your heart health with this new way of eating