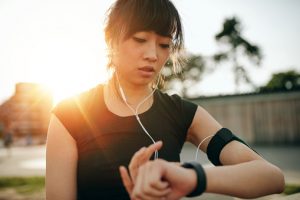 We all know that staying fit and exercising helps control our weight and prevent disease, but the benefits may also extend to brain health as well. According to a new study, the health of your heart and blood vessels when you’re younger plays a significant role in the healthy aging of the brain.

The researchers of the study go on to say that those who had heart disease risk factors during middle age were more likely to have elevated levels of amyloid plaque deposits in the brain: a sticky protein known to clump together in the brains of people with Alzheimer’s disease. They reached this conclusion by reviewing MRI scans of the brains of seniors who smoked, had high blood pressure, were obese, diabetic, or had high cholesterol levels when they were middle-aged.

The researchers stress that all the mentioned risk factors are known to harden blood vessels or otherwise affect vascular health.

“Amyloid is what we think, by leading hypotheses, accumulates to cause Alzheimer’s disease. So, this suggests that vascular risk in middle age may play a direct role in the development of Alzheimer’s disease,” said Dr. Rebecca Gottesman, an assistant professor of neurology at the Johns Hopkins University School of Medicine in Baltimore.

“In terms of one risk factor by itself, that turned out to be the most important one, which is interesting,” said Steven Austad, chair of biology of aging and the evolution of life histories at the University of Alabama, Birmingham. “Twenty years ago, obesity was not the problem that it is now, suggesting that 20 years from now things might be considerably worse.”
The study in question analyzed nearly 350 people whose heart health had been tracked since 1987 as part of an ongoing study, with the average age of participants being 52 years at the start of the study. Sixty percent were women, of whom 43 percent were black. The average follow-up time was almost 24 years.

At the start of the study, none of the participants had dementia, and about two decades later they were asked to undergo MRI screening to look for amyloid plaques in the brain. It was then the researchers discovered a link between heart risk factors and brain amyloid, with the results not varying based on race or known genetic risk factors for Alzheimer’s. The researchers also noted that heart risk factors that manifested late in life were not associated with brain amyloid deposits, with middle-aged heart health risk factors apparently being the major contributors to the elevated amounts of amyloid plaques seen.

The researchers stress that this by no means is indicative of a cause and effect relationship.