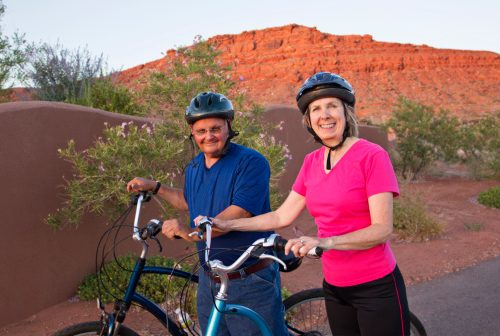 Cycling is considered a gentle and great way to boost your fitness. Your biking can vary in intensity and anyone at any age can do it. Biking can be done solo or in groups. It’s also inexpensive and can be done just about everywhere.

It’s hard to see anything wrong with biking, but it actually comes with a hidden concern involving your hearing.

If you do enjoy biking in groups, you may find yourself holding a conversation as you all ride along. But it can be more difficult to maintain a conversation when you pick up speed or are heading downhill. In this situation, the wind is more forceful, so you need to yell to get your message across to combat the noise.

Many of us don’t consider wind noise to be detrimental, but researcher Dr. Michael Seidman wanted to investigate if wind noise could contribute to hearing loss among cyclists. One day when he was riding and talking to his brother, he found himself yelling to combat the wind noise.

Dr. Seidman explained, “I realized we were screaming at each other and I never realized how noisy it was. And I’m thinking ‘It’s pristine, silent out here, and it’s so noisy!’ You hear the [makes whooshing sound] of the wind noise. So that’s what prompted it. I had a suspicion it was noisy because I’m an ear surgeon, that’s what I do. Everything about me is soundproofing things and trying to make things quieter.”

To get to the bottom of wind noise, cycling, and hearing, Dr. Seidman set himself up at the Ford Motor Company wind tunnel. He sat on his own bike, wore his own helmet, and had a microphone next to his ears. His colleagues recorded wind noise at a variety of degrees and speeds.


The Occupational Safety and Health Administration suggests you can be exposed to 85dB of loudness for eight hours. Anything over that is enough to cause hearing loss.

At certain angles, speeds, and winds, decibels could reach as high as 120.3dB, which is equivalent to the noise produced by a jet engine, meaning there is definitely potential for hearing loss while biking.

Although Dr. Seidman’s study was conducted in a controlled environment, it is a good place to begin. Cycling outdoors may actually have a higher risk of hearing loss due to traffic sounds, environmental sounds, and wind reaching the rider that may be altered because there are more obstacles for it. Furthermore, Dr. Seidman and his team didn’t take into account changes in wind direction or even cross the wind, which could be more detrimental.

“What I’d like to do is dosimetry. Just go for a ride and wear something that can monitor [noise levels],” Dr. Seidman said. “It’s kind of expensive technology but sort of like a radiation badge for somebody who works in an X-ray area—they make you wear these badges and every week or month they record how much radiation you’ve been exposed to. There are dosimeters for sound as well.”

Although Dr. Seidman suggests that earplugs are currently the only solution for reducing wind-induced hearing damage, he also says they are impractical for riding as riders need to be aware of surrounding noises to avoid hazard. He suggests that maybe in the future, helmet companies could design helmets that block out the wind but also make it so that the cyclist can still hear sounds around them.

In the meantime, being mindful of your bike rides is important for your hearing. Finding a way to protect your ears without increasing your risk of other dangers is a necessity.

Related: Can your hearing loss be cured?