Home » Eye Health » What eye freckles reveal about your health 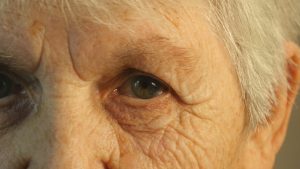 ake a look in the mirror and focus on the white part of your eyes. Is this part simply white or do you notice freckles? If you have freckles on the white part of your eye then you are part of the 60 percent of the population who does. These “freckles” are actually clusters of abnormal melanocytes, or melanin-generating cells, that sit on the surface of the iris. Some experts suggest that eye freckles appear similar to that of skin freckles—a result of sun exposure.

Study author Dr. Christoph Schwab explained, “In dermatology, the appearance of hyperpigmented spots—especially in chronic sun-damaged skin—is linked to a high lifetime accumulation of sunlight. We think that the pathway involved in iris freckles formation could be quite similar.”

What do eye freckles mean for your health?

The researchers collected skin and eye data from over 600 people. Sun exposure history, including the number of sunburns a person had, were collected from the participants.

Seventy-six percent of the participants had at least one eye freckle. The researchers found that those with an eye freckle had a few things in common. These individuals were generally older, reported more frequent sunburns, and had sun-damage and age spots on their skin.

The researchers suggest that the presence of eye freckles may be linked to a high exposure to sunlight over a person’s life.


They also found that presence of eye freckles was higher among study participants compared to the general population because the recruited participants came from public swimming pools. These people are likely to spend more time outdoors, which would expose them to greater UV compared to other individuals.

Dr. Schwab found the location of the eye freckles fascinating. The majority of eye freckles appeared on the lower, outer portion of the iris. He speculates that this occurs because the eyebrows and nose shield the inner and upper quadrants of the iris, which means the lower and outer areas of the iris have greater exposure.

Generally, eye freckles are benign but may be an early sign of sun-related health problems. The researchers wrote, “The presence of iris freckles also indicates sun damage to the skin, a risk factor for several different kinds of skin cancer. Within this context, there is certainly a need for further studies investigating the association between skin cancer and iris freckles.”

Dr. Schwab suggests that greater knowledge of eye freckles could offer insight into eye diseases regarding their pathogenesis. He concluded, “If someone exhibits iris freckles, especially [at a] young age, I would reconsider current sun protection strategies.” This means wearing protective skin wear, monitoring your sun exposure, sunscreen, hats, and sunglasses that protect against UVA and UVB.

The 8 worst things you are doing to your eyes

Important information you need to know about your eyes