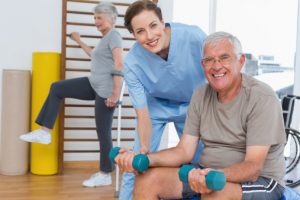 Sarcopenia is a condition where muscle mass and muscle function falls below the defined thresholds, resulting in issues with mobility, balance, and the ability to perform daily tasks. While progressive muscle loss is a natural and expected part of aging, sarcopenia occurs when this loss is greater than expected and can cause complications like an increased risk of falls and fractures. In order to better combat sarcopenia, a systematic review was conducted that examined the effects of interventions that combined physical activity and dietary supplements on muscle mass and function.

This review examined the results of 37 randomized and controlled trials conducted using participants aged 60 years and older. The dietary interventions included proteins, amino acids, and various vitamins, while the physical activity mainly focused on resistance training. Professor Rene Rizzoli of University Hospitals of Geneva commented, “Previous trials have shown that physical activity, and primarily resistance training interventions, have a positive impact on muscle strength and physical performance. Other studies have suggested that certain dietary supplements play a role in muscle mass or function.”


Researchers noted that the combined effect of dietary supplementation and exercise was less than expected, but have suggested that this is due to participants already being well-nourished, meaning the nutrition intervention did not have as large of an impact as it may have in subjects with pronounced nutritional deficits.

Overall, it was found that physical exercise had a positive impact on muscle mass and muscle function in healthy adults aged 60 and older, with improvements seen in gait speed, balance, and their ability to rise from a chair. These results suggest that in well-nourished adults, engaging in physical exercise may be enough to slow the progression of muscle loss and prevent sarcopenia, while adults with nutritional deficits may benefit from combined dietary and exercise interventions.

Eat this for stronger muscles